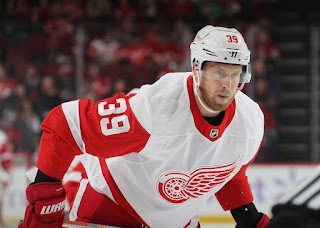 The Washington Capitals have acquired forward Anthony Mantha from the Detroit Red Wings in exchange for forwards Jakub Vrana and Richard Panik, plus a 2021 1st round pick and a 2022 2nd round draft pick.

A last minute shocker to the hockey world, this is the big splash of Washington's deadline, after missing out on other wingers. Mantha is a great, first line winger who is on a great contract. However, injuries have often been an issue for him. He goes to a much better team after years of suffering with the Red Wings. Mantha is signed for two more years after this year, with a $5.7 million cap hit. However, the price is way too much. Panik could be seen as a cap dump, as he is owed $2.75 million for two years after this year. However, Vrana scores just as much as Mantha, and is younger. Vrana and Panik for Mantha would be a good trade, but after adding the picks, the Caps give up a lot. Still, this should benefit their team for this year and the next few afterwards. They also get to avoid pending RFA negotiations with Vrana.

This is a great trade for the Red Wings. Mantha was a part of their core, but they could not do any better for a return. They do have to take on Panik's contract, but he is still a decent bottom-six winger who gives them value. By the time the Red Wings are competitive again, Panik's contract will be over. They also get Vrana, who is a legitimate top-six winger, like Mantha. He is slightly younger, and they can pick his next contract, as he becomes a UFA after having a $3.35 million cap hit this year. They also get two quality draft picks to improve their farm system. Overall, this is a great trade by GM Steve Yzerman.

Panik, 30, has scored three goals with six assists for nine points in 30 games for the Capitals this year. In his NHL career for Washington, the Arizona Coyotes, Tampa Bay Lightning, Chicago Blackhawks and Toronto Maple Leafs, Panik has scored 87 goals with 103 assists for 190 points in 530 games.

Posted by Carter at 4:04 PM No comments: 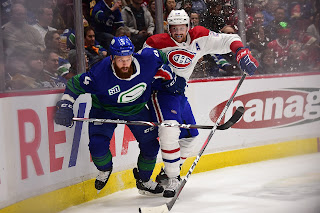 The Winnipeg Jets have acquired defenseman Jordie Benn from the Vancouver Canucks in exchange for a 2021 6th round pick.

The trade from Vancouver's side is pretty boring. A 6th round pick does not have much promise. It makes sense that Benn would go, considering he is a solid defensive defenseman, and a pending free agent on a bad Canucks team.

The Jets make a nice defensive addition here. Benn is a veteran defender who can kill penalties and play third pairing minutes. He also does not have a high cap hit, at $2 million before he becomes a free agent at the end of the year. He has not played too much for the Canucks this year, averaging under 15 minutes on ice per game. The price is so low that the Jets should be happy.

Posted by Carter at 3:50 PM No comments: The Anaheim Ducks have acquired defenseman Haydn Fleury from the Carolina Hurricanes in exchange for defenseman Jani Hakanpaa and a 6th round draft pick.

Drafted 7th overall back in 2014, Fleury has not panned out for the Hurricanes. He has played a lot this year, but has failed to establish himself as a legitimate NHL player. He is not elite offensively or defensively, but just alright at both. Ice time has been an ice for Fleury, has he has played very protected minutes, averaging under 14 minutes a game. He is still young, and signed through next year with a $1.3 million cap hit. Even afterwards, Fleury will be an RFA. It is definitely worth a shot for the Ducks, who are rebuilding. Fleury will take the spot of Hakanpaa or the recently departed Ben Hutton on Anaheim's blue line.

Fleury, 24, has just one point, a goal, in 35 games for the Hurricanes this year. In his NHL career, all in Carolina, Fleury has scored five goals with 19 assists for 24 points in 167 games.

The Hurricanes are not a bad team; they are actually one of the league's best and are headed to the playoffs again this year. However, they do not need Fleury, so trying to give him a change of scenery makes sense. However, the value here is not great. Hakanpaa has been a pretty good defensive defenseman for the Ducks this year, but has less NHL experience than Fleury. A 2010 4th rounder by St. Louis, he spent most of his career in Finland, before coming to the NHL last year. He only played in five games, but had 13 points in 47 AHL games. The sixth is not a big push on the value scale.

Hakanpaa, 29, has one assist with 65 blocked shots and 168 hits in 42 games for the Ducks this year. In his NHL career, he has one additional goal with 15 hits and seven blocked shots in five games.

Posted by Carter at 3:42 PM No comments: 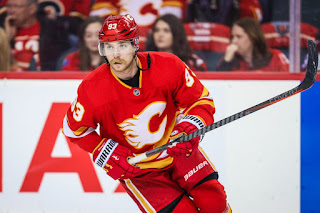 The Florida Panthers have acquired forward Sam Bennett and a 2022 6th round draft pick from the Calgary Flames in exchange for forward Emil Heineman and a 2022 2nd round pick.

Yeah, the value is not great for the Panthers. At best, Bennett is a third line center. He is really a fourth liner, though, and he makes $2.55 million on a deal that will get higher when he becomes a restricted free agent after this season. A former 4th overall pick, Bennett did not bring much offensive production when he first came into the league, and that has dipped even more over the past two seasons. The best he has ever played was in the most recent postseason, when he scored five goals with three assists in eight games. A second round pick for Bennett, a physical player who often takes penalties, is too much on its own. Then they added Heineman, their second round pick from last year. Bennett does make their team harder to play against, but that does not change the value from being rough.

It was unclear if the Flames would move on from Bennett, as even though they are out of the playoff picture, the team still has some hope for next year, while Bennett is an RFA, not a UFA after the season. But after this offer from Florida, it makes sense why GM Brad Treliving made a move. A second round pick is solid, especially in a deep draft next year. Heineman is a Swedish winger who is playing professionally overseas right now. He is still a teenager, and his draft position last year shows that he has promise.

Heineman, 19, has scored seven goals with six assists for 13 points in 43 games for Leksands IF in Sweden this year. In his SweHL career, Heinenman has those 13 points, plus two extra assists in 54 games.

Posted by Carter at 3:28 PM No comments: