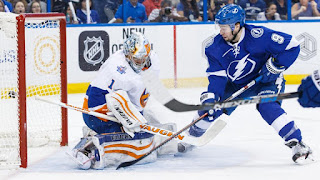 On Saturday, April 30, 2016, the New York Islanders faced off against the Tampa Bay Lightning in game 2 of round 2 in the Stanley Cup playoffs. In game 1, the Islanders won 5-3 and Tampa Bay goalie Ben Bishop was pulled from the game in the second period. Tampa Bay has won all game 2s under coach Jon Cooper after losing game 1. Lately, for the Islanders the opposite has happened with New York losing game 2 after a game 1 victory. Early in the game, Islanders Cal Clutterbuck and Nick Leddy collide and Tampa Bay goes down the other way and sloppy back checking by Matt Martin leads Tyler Johnson wide open as his backhander beats Thomas Greiss for the first goal. Ondrej Palat, who scored the first goal in game 1, gets an assist. Victor Hedman gets a helper too. Later in the period Greiss allows a weak five-hole goal against Jonathan Drouin to make it 2-0. The goal was Drouin's first career playoff marker. Valtteri Filppula gets the only assist. But that was not all in the 1st as a power-play shot by the Islanders' Thomas Hickey deflects off Nikolay Kuleman and the Islanders make it 2-1. Hickey and round 1 game 5 hero Alan Quine get helpers. In the second period, with Tampa Bay on the powerplay, a shot by Hedman goes off the Islanders' Calvin de Haan's skate and caroms in 3-1 Tampa Bay. The other two goal scores, Johnson and Drouin, got assists on the play. The Islanders were terrible offensively the entire game going from outshooting Tampa Bay 14-5 to being outshot 28-18. Hedman's goal was the only in the period as the Lightning went into the locker room up 3-1. With just over 2 minutes left Johnson shot from his own zone goes in an empty net and Tampa Bay ices it 4-1. That was the final score of the game as the Lightning tie up the series at 1. The refs were not afraid of calling penalties as there was 18 minor penalties in the game. Game 3 will be in Barclays Center, Brooklyn on Tuesday, May 3.
Posted by Carter at 8:46 PM No comments: 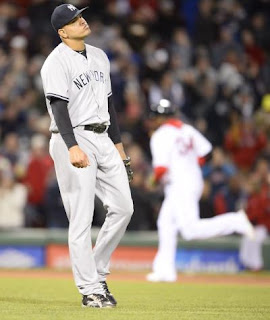 On Friday, April 29,2016, the New York Yankees played their archenemy, the Boston Red sox in Boston. The pitching matchup was Masahiro Tanaka against Henry Owens. The first run was in the top of the first when Alex Rodriguez homered. 1-0 Yankees. Later in the game, Didi Gregorius gets plunked in the bat with two outs and no one on. A single by former Red Sock Jacoby Ellsbury got Gregorius to second and he then scored on a hit by Brett Gardner. 2-0. Later in the game a 2- run double by Jackie Bradley Jr. in the 7th ties up the game 2-2. That ended Tanaka's night. Then in the eighth, Pitcher Dellin Betances allows a two-run homer to David Ortiz. 4-2 Boston. That was the final score. Pitcher Koji Uehara gets the win, Betances gets the loss and Craig Krimbel gets the save.
Posted by Carter at 10:31 PM 1 comment: 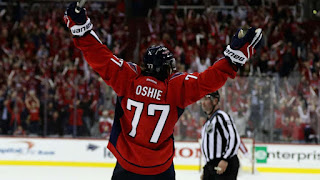 On Thursday, April 28th, 2016, the Washington Capitals faced the Pittsburgh Penguins  in game one of round 2 in the Stanley Cup playoffs. Penguins goaltender Matt Murray had made many good saves until a shot by Jason Chimera forces Murray to give up a rebound and it's buried by Andre Burakovsky 1-0 Washington. John Carlson and Chimera get assists. That was the only goal of the 1st. In the second period, a nice play by the Penguins' Nick Bonino forces Washington defensemen Nate Schmidt and Dmitry Orlov to collide and then Bonino's shot is saved by goalie Braden Holtby and defenseman Ben Lovejoy gets the rebound 1-1. Bonino and Carl Hagelin get assists. Not much later a wicked backhander by Evgeni Malkin hits the post and goes in 2-1 Pittsburgh. Assists go to Chris Kunitz and Kris Letang. But the Penguins didn't have the lead for long as T.J. Oshie scores unassisted and the Capitals tie it up. That's the last of the goals in the 2nd. Quickly in the 3rd, Oshie scores again making it a 3-2 game. Alex Ovechkin gets the only assist. About 5 minutes later, Bonino scores his first goal of the postseason. 3-3. Assists go to Hagelin and Phil Kessel. The game then went to overtime. Almost half way through, A wrap around chance for Oshie appears to go in, and the review shows so, and Oshie completes the hatrick, and Washington wins game 1 4-3. 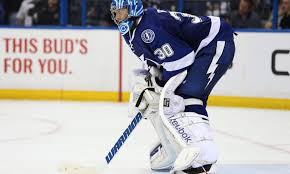 On Wednesday, April 27, 2016, the New York Islanders played the Tampa Bay Lightning in game 1 of round 2 in the Stanley Cup playoffs in Amalie arena, Tampa Bay. Quickly into the game, the Lightning's Ondrej Palat scored. Assists go to Jonathan Drouin and Vladislav Namestnikov. The Lightning didn't have the lead for long as 2:39 later Travis Hamonic's shot leaks through goalie Ben Bishop's pad. 1-1. Assists go to Alan Quine and John Tavares. Later in the period bad back checking by Tampa Bay leads to a nice pass from Ryan Strome to Shane Prince and Prince makes no mistakes and buries the puck past Bishop 2-1. Brock Nelson got an assist along with Strome. The line's next shift was similar as Prince scores again with 3 seconds left as Strome and Nelson get another assist 3-1 New York. In the second period, a penalty by Jonathan Marchessault gave the Islanders a power play goal by John Tavares ending
Bishop's night. That's 4GA on 13 shots. Assists go to Kyle Okposo and Frans Nielson. A scary moment for the Islanders when Alex Killorn's dumped in puck hits head coach Jack Capuano in the nose. Former Stanley cup winner Doug Weight then took over as head coach. In the 3rd period, goals by Nikita Kucherov and Valtteri Filppula got the game to 4-3. Matthew Carle, Victor Hedman, Killorn and Jason Garrison all got assists. Luckily for the Islanders, Cal Clutterbuck's empty net goal made it 5-3. Casey Cizikas and Calvin de Haan got assists. More good news is that Capuano was on the bench to see the goal. Final Islanders 5, Lightning 3.
other scores: Predators 2, Ducks 1. MLB: Yankees 2, Rangers 3. Padres 9 Giants13 Phillies3 Nats0 Chisox4 Jays0 Braves4 Bosox9 O's3 Rays1 Reds2 Mets5 A's4 Tigers9 Indians6 Twins5 Pirates9 Rockies8 Cards11 Dbacks4 Royals2 Angels4 Astros7 Mariners4 Marlins 2 Dodgers 0 Brewers and Cubs postponed.
Posted by Carter at 4:23 PM 1 comment:

The Washington Capitals and Pittsburgh Penguins will face off in round 2 of the Stanley Cup playoffs. Captains Alex Ovechkin and Sidney Crosby will reignite a big rivalry.  The Capitals come off a 6 game series with the Philadelphia Flyers and the Penguins beat the New York Rangers in 5 games.  This will be the second time the 2 captains played in the playoffs against each other with the Penguins winning in 7.  Washington goalie Braden Holtby leads the postseason in save%, GAA, and shutouts.  The Penguins starting goalie is rookie Matt Murray who was dominant vs New York.  The Penguins have the best powerplay and goals/game this postseason although the Capitals lead in GA/game.  Both teams have good defensive cores.  The Penguins have Kris Letang, Olli Maatta and Trevor Daley as their best 3 blueliners.  The Capitals have John Carlson, Matt Niskanen and Karl Alzner.  The Penguins offense has help from rookies Conor Sheary, Tom Kuhnhackl and Bryan Rust as well as from veterans Patric Hornqvist, Carl Hagelin, and former Capital Eric Fehr.  The Capitals have Justin Williams, Mike Richards, and Jason Chimera.  Finally, we have the X factors.  It's T.J. Oshie for the Capitals and Phil Kessel for the Penguins.
Posted by Carter at 1:07 PM No comments:

After John Taveres' goal in 2OT on Sunday, April 24, the New York Islanders will face off in round 2 of the Stanley Cup playoffs against the Tampa Bay Lightning. Both teams will play without key players.  The Lightning will play without former Rocket Richard winner, multi-time all star and captain Steven Stamkos and defenseman Anton Stralmon.  Stralmon lost in the Stanley Cup finals to the Los Angeles Kings as a member of the New York Rangers in 2014.  The Lightning do have Ryan Callahan and Bryan Boyle who were with Stralmon in 2014 with Callahan being the captain.  The Islanders are missing Mikhail Grabovski, Anders Lee, and goalie Jaroslav Halak.  With the Stamkos injury, red hot Nikita Kucherov, Ondrej Palat and Tyler Johnson will play an important role.  The Islanders will have help from rookies Shane Prince and Alan Quine.  Thomas Greiss will be in net for New York.  When Islanders captain John Tavares was the first overall pick in 2009, defenseman Victor Hedman was number two for Tampa Bay.  To close out the preview are the X factors.  They are Brock Nelson for the Islanders and Nikita Kucherov for the Lightning.
Posted by Carter at 12:47 PM No comments:

Hanks for Nothing! King pulled again as Rangers seasons ends 4/24/16

On Saturday, the Pittsburgh Penguins beat the New York Rangers 6-3.  After the 2nd period, goalie Henrik Lundqvist was pulled for the second consecutive time in the postseason.  Penguins rookies Bryan Rust and Conor Sheary combined for 3 goals in the second in the win.  Fomer Ranger Carl Hagelin also scored in the win.  The Penguins will play the winner of the Washington Capital and Philadelphia Flyers in the second round.
While the Rangers lost in New York, the New York Islanders were playing in game 5 of a 2-2 series in Sunrise Florida.  The Islanders were playing the Florida Panthers.  The game had started on Friday and goals by Islanders' Frans Nielson and the Panters' Aleksander Barkov had the game tied 1-1 going into overtime.  When the Islanders' Calvin de Haan threw the puck from the crease, Barkov has an OT penalty shot which Thomas Greiss saved.  The game went to double overtime and Islanders rookie Alan Quine scored a powerplay goal to end the game.  It was the second longest game is Islanders history.  The series will shift to Barlcays Center in Brooklyn at 7pm as the Islanders have a chance to win the series and play the Tampa Bay Lightning in the second round.

This is the link to my first ever post on a blog.  I wrote this for the LoHud New York Yankee blog run by Chad Jennings when I was 7 years old. LoHud Post 1/31/14
Posted by Carter at 12:18 PM No comments: