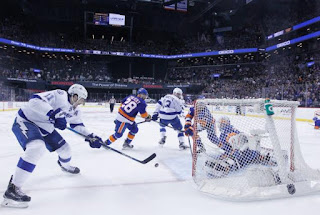 On Tuesday, May 3rd, 2016, the New York Islanders faced the Tampa Bay Lightning in game 3 of a 1-1 series. With Josh Bailey back from injury, coach Jack Capuano decides to play Bailey who had a bad round 1 for Ryan Strome, who is having a good postseason. The Lightning continue to do their regular thing: play 7 defenseman and 11 fowards. When the Islanders won a faceoff just outside their offensive zone, a dumped in puck by Travis Hamonic hits off the stick of Nikolay Kulemin and goes right in front of the net where Bailey
comes from behind the net and buries the puck. It's Bailey's first goal of the playoffs and first in his past 22 games, from Kulemin and Hamonic. Late in the period, with Tampa Bay on the powerplay, a point shot from Alex Killorn is deflected in by Ryan Callahan with only 13 seconds to go. It's Callahan's first from Killorn and Valtteri Filppula. In the second period, when Jonathan Drouin skates up the ice with the puck, Thomas Hickey gives him a crushing hit. Drouin went straight to the locker room. He would later return. Later in the period, a offensive faceoff win for Tyler Johnson goes to Victor Hedman and a slapshot by Hedman finds the back of the net. 2-1 Tampa. That wasn't all as Nick Leddy's shot gets passed Ben Bishop and the game is tied. Early in the third period, Bailey scores again and the Islanders lead 3-2. Not much later, Vladislav Namestnikov ties up the game at 3. Later in the game, Cal Clutterbuck scores using his outstanding shot to give the Islanders a 4-3 lead. The game's next shot was from Bailey looking for the Hatrick but Ben Bishop makes the save of the night, robbing Bailey. With the goalie pulled, Nikita Kucherov ties it up. The game then went to overtime and a dirty hit by Brian Boyle on Thomas Hickey turns the puck over and then after Hedman's shot goes wide, Boyle gets the carom and ends the game 5-4 Lightning. Capuano's move to play Bailey over Strome worked but the Isles fall to the Lightning and are trailing the series 2-1.
Posted by Carter at 4:49 PM