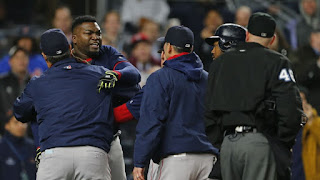 On Friday, May 6, 2016, the New York Yankees started a weekend series vs their archenemy, the Boston Red Sox. The pitching matchup was the struggling Michael Pineda for the Yankees and Rick Porcello for the Red Sox. Porcello's last start was against the Yankees and he threw 7 shut out innings for his 5th win to improve to 5-0. The Yankees looking to hand Porcello his first loss. In the first inning of the game, David Ortiz hits a 2 run home run to make it  2-0 Red Sox lead. The bomb was Ortiz's 510th career homer, passing Gary Sheffield for number 25 on the all time list. In the bottom of the first, Jacoby Ellsbury steals second after a lead off walk. Then, when the ball gets away from catcher Christian Vazquez, Ellsbury advances to third. On the play, it appears something's wrong with  Ellsbury but he stays on third. The next batter, Brian McCann, then doubled home Ellsbury to cut the lead in half 2-1. In the top of the second, Dustin Ackley comes out on the field in stead of Ellsbury. In the bottom of the second, with runners on first and second, Ackley in his first at bat of the game gets a base hit, scoring Starlin Castro, but Ronald Torreyes is thrown out at third to end the inning but the Yanks tie it 2-2. In the bottom of the 4th, it was announced a hip injury for Ellsbury. Still no score or major excitement but in the top of the 7th, lefthander Chasen Shreve replaced Pineda. Shreve allowed a double and got a bunt out until Kirby Yates replaced him. Yates then got out of the inning. In the bottom of the 7th, with Porcello still in the game, Aaron Hicks hit his first home run as a Yankee to give them a 3-2 lead. In the top of the 8th, Ben Gamel replaced Ackley as a defensive replacement, making his MLB debut. Also, Dellin Betances replaced Yates as pitcher. The Red Sox immediately test Gamel, as Ortiz flied out to him. Betances struck out Hanley Ramirez and allowed a single to Travis Shaw. Closer Andrew Miller then replaced him for the four out save. Former Yankee Chris Young pinch hit for Brock Holt to face Miller. He walked Young then got out Jackie Bradley. Tommy Layne then came in the game for Porcello. In the top of the ninth, with bases loaded and one out, David Ortiz had the chance to be the hero. On a 3-1 count, a pitch that appeared outside is a called strike, leading to Red Sox manager John Farrell being ejected by Ron Kulpa, the home plate ump. Ortiz then was called out on strikes on the next pitch and then Kulpa ejects him. The next batter, Hanley Ramirez then struck out to end the game as the Yankees win 3-2. Kirby Yates gets the win, his first decision in Pinstripes. Rick Porcello gets a win, declining his record to 5-1. Andrew Miller got the save, but will stop getting then soon as Aroldis Chapman will come back from suspension.
Posted by Carter at 11:11 AM