From Monday, May 16, 2016, the New York Yankees went west for 7 games: 3 in Arizona vs the Diamondbacks and 4 in Oakland vs the A's.
The trip didn't start well. In pitcher Chad Green's ML debut, the rookie pitched only 4 innings, allowing 6 runs, 4 earned. D-backs pitcher Robbie Ray went 7 innings, allowing only 2 runs. D-backs Jake Lamb was 3-4 with a three run bomb and finished a triple shy of the cycle. The final score was 12-2 D-backs. The next game wasn't much better. Yanks pitcher Michael Pineda went 5 innings, allowing the same amount of runs, falling to Zack Greinke, who had 7 innings of 3 run ball as the D-backs win the series with a 5-3 win. 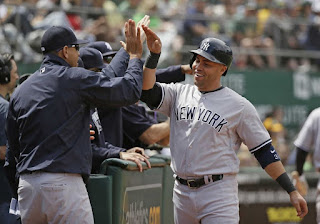 Luckily, the losing stopped there. After a lead off double, Yanks starter Nathan Eovaldi retired 18 straight, going 6, only allowing 1 run. Brett Gardner and Jacoby Ellsbury were involved in all the Yankees' runs as they avoided the sweep, winning 4-2.
In Oakland, Pitcher Ivan Nova went 6 innings allowing 1 run and the offense scored 4 runs again as the Yanks take the opener 4-1. In the next game, pitcher C.C. Sabathia allowed one run in 6 innings in his return off the disabled list and the offense, lead by Carlos Beltran and his 3 RBI doubles, score 8 runs as the Yanks win again, taking it by a score of 8-3. In the next one, Masahiro Tanaka went 7 innings, allowing just 1 run. Rob Refsnyder had an RBI double in his season debut, as the Yankees take the first three, beating Oakland  by a score of 5-1.
In the last game, the Yankees tried to take their first 4 game series sweep in Oakland since 1979. It also would be their first sweep this year. In the game, with the Yanks up 2-1, a two run double by Stephen Vogt gave the A's a 3-2 lead. But the Yankees answered back. RBI singles by Mark Teixeira and Starlin Castro gave the Yanks a 4-3 lead. It was Teixeira's only hit on the trip. Both teams scored another run as the final score was 5-4 Yanks.
On the trip, the Yanks had 5 straight quality starts, all during their wins. On the streak, the starters went 31 innings, allowing just 7 runs.
Posted by Carter at 4:51 PM