The Impacts of Gary Sanchez and Aaron Judge 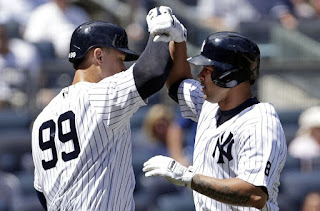 The New York Yankees recently called up two high-rated prospects and these two prospects have made a HUGE impact on the team. They are catcher Gary Sanchez and right fielder Aaron Judge.
Sanchez, who's been called the catcher of the future for seasons has stepped into that roll with a spectacular 6 HR and 12 RBIs to go along with a .361 batting average in 61ABs in 16 games, meaning that he's hitting a home run about every 10 ABs, an amazing stat for a rookie. I think that next year Sanchez should be the starting catcher as veteran Brian McCann is moved into a DH spot.
Judge has played in less games than Sanchez but he still has an outstanding 2HRs and 6 RBIs with a .308 BA in his 26 ABs in his career's first 7 games. Judge has always been listed as Carlos Beltran's replacement and now with Beltran on the Texas Rangers, Judge has stepped into his roll as the Yanks' future RF.  Judge should start at right field next year.
Judge and Sanchez aren't the only good offensive prospects the Yankees have. Clint Fraizer, the Yanks' top prospect, is a CF who has great potential. Shortstops Jorge Mateo and Gleyber Torres could move into 2B and 3B spots because Didi Gregorius is young and is having another great year. And with that, you can tell the Yanks' future is bright.