The Arizona Coyotes signed a lot of players this season and they re-signed a lot of players too. Shane Doan is back for another year, and so is Michael Stone and Jarred Tinordi. Connor Murphy was also signed to a 6 year deal. The club lost depth in Alex Tanguay, (who is yet to sign a contract with a team) Boyd Gordon (PHI) and Kyle Chipchura (KHL), so 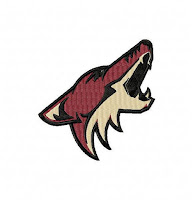 they went out and signed Radim Vrbata and Chris Mueller to one year deals. They also signed Luke Schenn to 2 years and Jamie McGinn to 3 years. In the first round of the 2016 NHL draft, Arizona selected C Clayton Keller with the 7th overall pick and D Jakub Chychrun with the 16th pick which was acquired from Detroit. Keller could be the Coyotes' second line center of the future behind Dylan Strome. Chychrun could pair up well with either Oliver Ekman-Larsson or Connor Murphy in a couple of years. The goaltending is by far the weakest part of the team. Mike Smith is dropping off like cray and Louis Domingue isn't a starter yet. Justin Peters signed to a one year deal but most likely will play in the AHL. The predicted lines look like this:
Max Domi- Martin Hanzal- Anthony Duclair
Jamie McGinn- Dylan Strome- Radim Vrbata
Ryan White- Brad Richardson- Shane Doan
Jordan Martinook- Christian Dvorak- Tyler Gaudet
On defense is:
Oliver Ekman-Larsson- Michael Stone
Alex Goligoski- Connor Murphy
Luke Schenn- Zbynek Michalek
C Chris Mueller and D Kevin Connauton are scratched and Mike Smith and Louis Domingue in the cage.
For my prediction, the Arizona Coyotes are a team with a lot of young talent in Max Domi, Anthony Duclair and Dylan Strome but they will not be a playoff team in 2016-17.
Posted by Carter at 4:38 PM No comments: 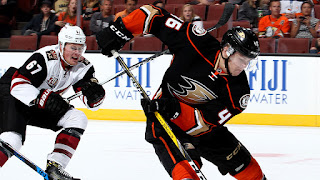 The Anaheim Ducks weren't the loudest team this off-season but they did make some moves via free agency. After losing some depth in their forwards with Jamie McGinn (ARI), Chris Stewart (MIN) and David Perron (STL) all out of town, the Ducks went out and signed Antoine Vermette to a two year deal and Mason Raymond and Jared Boll to one year deals. They also signed Jeff Schultz for one year to help their defensive depth. In the 2016 NHL draft's first round, the Ducks selected LW Max Jones with the 24th pick. They also drafted C Sam Steel with Pittsburgh's pick which was acquired from the Maple Leafs in a deal that included G Fredrick Anderson. Jones and Steel can be the first liners in the future for this team once Ryan Getzlaf and Corey Perry are gone.
When the expansion draft for Las Vegas comes around, every team can protect 7 forwards and 3 defenseman or any combination of 8 skaters.  Unfortunately, Anaheim has a problem. They have 4 young defenseman in Hampus Lindholm, Sami Vatanen, Cam Fowler and Simon Despres all are 25 or younger. Despres is the odd one out as you can only protect 3 defenseman and because protecting 4 means losing 2 extra forwards and the no trade clause to Kevin Bieksa forces the Ducks to protect him. Bieksa is 36 and age has taken a toll on him in recent years.
The newest part of the team is the back end or the goalies. Fredrick Anderson was traded to Toronto so that leaves John Gibson as the starter. Anton Khudobin went to Boston so newly acquired Jonathan Bernier will be the backup.
The projected lines look like this:
Nick Ritchie-Ryan Getlaf-Corey Perry
Rickard Rakell-Ryan Kesler-Jakub Silfverberg
Andrew Cogliano-Antoine Vermette-Ryan Garbutt
Mason Raymond-Nate Thompson-Jared Boll
Defense is:
Hampus Lindholm-Sami Vatanen
Cam Fowler-Kevin Bieksa
Simon Despres-Josh Manson
John Gibson and Jonathan Bernier in net.
Scratched is LW Chris Wagner and D Clayton Stoner.
For my prediction, I think if Getzlaf and Perry don't drop off too much then the Ducks will make a return to the postseason in a weak Pacific division
Posted by Carter at 8:01 AM 2 comments:

CarterHud Exclusive: 5 Questions For The Ghost 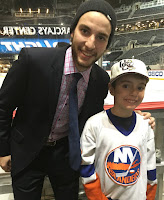 Today I had the pleasure of interviewing Philadelphia Flyers defenseman Shayne Gostisbehere. Gostisbehere, or Ghost, as people call him will be a part of Team North America's defensive core in the World Cup of Hockey. North America consists of players from USA and Canada who are age 23 and younger. Gostisbehere 23, was a finalist for the Calder trophy for best rookie and helped propel the Flyers to a playoff birth.

Q2: Who are you most excited to play with on team North America?
A2: {I} can't wait to play with Connor McDavid as he was the number one pick.

Q4: Ivan Provorov is a young Flyers defenseman who is expected to make the team this year. Do you think he'll make a big impact on this Flyers team like you did last year?
A4: I think Provy is an unbelievable player and should help us in all areas of the game.

Posted by Carter at 7:46 PM No comments: