3. Markus Granlund. The Canucks center had both a goal and an assist when his team was down 3-0 to give them a 4-3 comeback win in OT.
2. Brian Gionta. The captain of the Sabres had a pair of goals vs. Edmonton to lead his team to a 6-2 win. 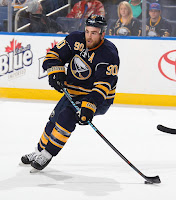 1. Ryan O'Reilly. Like his teammate Gionta, O'Reilly had 2 goals AND 2 assists to also help lead Buffalo to victory.

And those were your 3 stars of the day.

There was a fair amount of news coming out of a day with just 3 games. The top headlines are:
Red Wings set for last home opener at Joe Louis Arena. Josh Bailey and Brandon Sutter get OT winners for their teams. Carey Price skates, won't play Tuesday. Maimonides Medical Center shows support for Islanders before their home opener by dressing its resident newborns in orange Islanders onesies.
And that will conclude the 4th edition of a day in hockey.