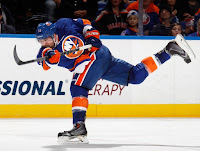 In the 7th edition of a day in hockey, there were just 3 NHL games. Here are the scores:
Coyotes 2 - Islanders 3
Blackhawks 2 - Blue Jackets 3
Predators 3 - Red Wings 5
Those were the scores.

Here are your 3 stars of the day:

3. Gustav Nyquist. The only forward star of the day, Nyquist's goal and an assist lead his 'Wings to a 5-3 victory.

2. Zach Werenski. The rookie defenseman has taken a solid impact to the Blue Jackets team even though they were the last NHL team to win a game. Werenski's goal and assist helped the Jackets get that win, a 3-2 victory over Chicago.

1. Johnny Boychuk. As a defenseman, Boychuk made an outstanding effort to get a breakaway, leading to a goal by Ryan Strome against his brother Dylan's Coyotes. Later in the game, when it's tied at 2 and the Coyotes have a powerplay, Boychuk's wicked slapper won the game for his Isles.
And those were your 3 stars of the day.

There wasn't much news coming out of the day but you don't expect that when there is only 3 games. The top 2 headlines were:
Ryan Strome wins first meeting of Strome brothers. Flyers' RW Dale Weise suspended 3 games for a blow to the head of Duck's defenseman Korbinian Holzer.

And that will conclude the 7th edition of a day in hockey.