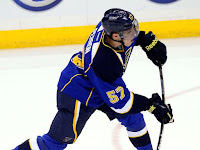 The 3 stars of the day were:

3. Shane Harper. In just his 5th NHL game, Harper didn't just score his first NHL goal, Harper scored his first 2 goals to lead the Panthers to a 5-2 victory over the Avs.

2. Sergei Bobrovsky. The goalie of the Blue Jackets was able to find away to beat both Tyler Seguin and Jamie Benn plus other weapons on the Stars team by recording a 32 save shutout. 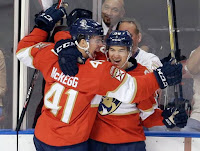 1. David Perron. Perron was looking to impress the St. Louis management after signing with them in the off-season. Perron scored his first 3 goals as a Blue to lead them to a 6-4 win over Calgary. 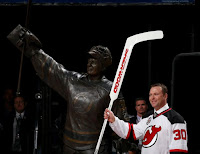 And those were your 3 stars of the day.
There was quite a lot of news on Saturday mostly because of the Heritage Classic .(which the Oilers and Jets alumni game was Saturday and the real game is Sunday) Here are the other top headlines: Blackhawks defenseman Trevor van Riemsdyk expected to miss a month. Coyotes goalie Mike Smith out week to week. Scott Stevens tears up watching Devils tribute (he's the assistant coach of the Wild after being a former captain for New Jersey). Martin Brodeur statue unveiled by Devils.
And that will conclude the 8th edition of a day in hockey.