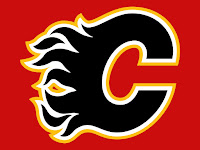 The Calgary Flames had the leagues' worst goal-tending last year. Jonas Hiller, Karri Ramo and Joni Ortio all were terrible last year. That's totally changed with all three of them out. On draft day, the Flames finally got a legitimate starting goalie when they traded for Brian Elliot. In free agency, they signed backup Chad Johnson. Even though Johnson is just a backup, he's better then all the goalies the Flames had last year. Prospect Jon Gillies looks to be ready next year. One of the Flames' two best players, Sean Monahan signed a massive contract extension. Their other best player, Johnny Gaudreau hopes to sign a contract soon. Troy Brouwer signed with the team and could either play with Gaudreau and Monahan or the second line with Sam Bennett. Brouwer replaces C Joe Colbourne, who went to Colorado. The also signed depth forward Linden Vey, to replace depth forward Josh Jooris, who went tho the Rangers. Captain d-man Mark Giordano is looking to stay healthy after 2 injury plagued seasons. T.J. Brodie and Dougie Hamilton can take over the defensive core this season. In the 2016 NHL draft, the Flames selected LW Matthew Tkachuk with the 6th overall pick. While the Flames needed a RW more, Tkachuk was still an amazing pick at no. 6. He has a nice future playing with Sam Bennett.
The Flames' projected lines look like this:
Johnny Gaudreau- Sean Monahan- Troy Brouwer
Lance Bouma- Sam Bennett- Michael Frolik
Michael Ferland- Mikael Backland- Alex Chiasson
Hunter Shinkaruk- Matt Stajan- Linden Vey

On defense is:
T.J Brodie- Dougie Hamilton
Mark Giordano- Dennis Wideman
Jryki Jokipakka- Deryk Engelland
In net is Brian Elliot and Chad Johnson. Brandon Bollig is scratched and Ladislav Smid is injured.
For my prediction, the Calgary Flames are a team on the rise, but not yet a playoff team.
Posted by Carter at 8:53 AM