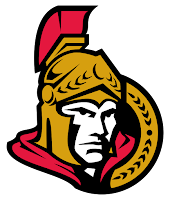 The Ottawa Senators were involved in the NHL's 3rd biggest trade in the off-season when they sent C Mika Zibanejad to the Rangers in exchange for C Derick Brassard. Brassard is a better player right now but Zibanejad should have a better future than Brassard being the younger player. Besides that, not much happened. The only notable player they lost was defenseman Patrick Wiercoich who signed a 2 year deal with Colorado. They also added C Chris Kelly, who signed a one year deal.
Defenseman Erik Karlsson is definitely the most offensive defenseman in the league and arguably the best all-around defenseman in the league. C Kyle Turris, RW Bobby Ryan, LW Mike Hoffman and RW Mark Stone lead a potent offense which should not have trouble scoring this year. Behind Karlsson, Dion Phaneuf, Mark Methot and Cody Ceci are all solid defensemen. Goaltenders Craig Anderson and Andrew Hammond are aging which means that Ottawa needs to win now.
In the first round of the 2016 NHL draft, before the New Jersey Devils were about to select someone with the 11th overall pick, Ottawa then traded the 12th overall pick (which was theirs) and a third round pick for the 11th pick. Ottawa then drafted C Logan Brown with the 11th pick. Brown's a big center (6.6) and can go along with some of Ottawa's wingers.
The Senators' projected lines look like this:

Finally for my prediction, the Ottawa Senators, a win now team but a team on the rise will not make the playoffs in 2016-17.