Q & A with Islander Eric Boulton 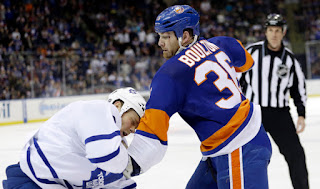 Today I had the pleasure to interview New York Islanders' LW Eric Boulton. Boulton, 40, was drafted 234th overall in the 9th round of the 1994 NHL draft by the New York Rangers. While he never played for the Rangers, he's played for the Buffalo Sabres, Atlanta Thrashers and New Jersey Devils before signing with the Islanders in 2012. He has 31 goals and 48 assists for 79 points in 654 career NHL games. Boulton, more known as an enforcer, has 1,421 penalty minutes in his career, 710 from fights. Boulton is 5th on the active list for career penalty minutes.  After Jaromir Jagr and Patrick Elias, Boulton is the 3rd oldest active player in the NHL.

Q1: Do you think the Islanders additions/subtractions in the off-season will take the team a step forward or a step back?
A1: When you lose three players like Okposo, Nielson and Martin, it's a tough loss. I think Garth (Snow) did a great job filling those spots. We got veteran leadership in Andrew Ladd and Jason Chimera. Ladd was a captain and won Stanley Cups. P.A. Parenteau has been here before and has great chemistry with John Tavares.

Q2: Do you think C Mathew Barzal will make the team this year?
A2: Coming from juniors, it's a different game. He has skill and is a very talented kid.
He opens eyes every time he's on the ice. Whether or not he is good enough away from the puck only time will tell, but so far he's looked great.

Q3: In the locker room, who is the team's biggest presence?
A3: I would have to say John Tavares, obviously because he's our captain and because of his great work ethic in practice and his professionalism. He's not a rah-rah guy but he leads by example.

Q4: What team is your favorite to play against and why?
A4: The New York Rangers. It's a great rivalry with the Isles. The area gets into the game. It seems like half the fans at our arena are Ranger fans and vice versa at MSG. It's easy to get pumped up for these games.

Q5: Which is better, playing at Nassau Coliseum or playing at Barclays Center?
A5: You can't compare. Barclays is nicer, newer, and fresher. There aren't many places left with the atmosphere of the coliseum. It was the loudest building I ever played in and it's tough to replicate that.

Q6: Which goalie do you think will get the nod on opening night?
A6: Greiss had a great playoffs last year, he really stepped up but it's up to the coaches. I think they'll go with whoever is healthy and playing best.

Q7: Growing up, what was your favorite NHL team?
A7: The Edmonton Oilers. They won lots of cups with Gretzky and Messier. They were very easy to like, they were winners when I was growing up.

Q8: What is better, scoring a goal or winning a fight?
A8: Scoring! I don't score too many so it's fun to get one once in a while. I'm used to fighting so it's different to chip in offensively.

Q9: Now that Matt Martin is gone, who do you think would win a fight between you two?
A9: Good question, me!

Q10A: Who is the toughest fighter in the NHL?
A10A: Got to say myself

Q12: Any thoughts what you might do after you retire?
A12: I want to stay in the NHL either as a coach or as a broadcaster. I love the game and would love to stay in it.