Rookies! The Many rookies of the NHL 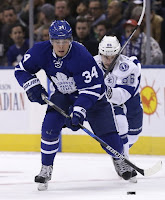 Every player has a rookie season. Sidney Crosby, Alex Ovechkin and John Tavares were all once rookies. Today, I will list the rookie class of 2016-17. Some will play all their teams games. Some will be sent down to the AHL/Juniors. Also, some players are qualified as rookies but have played in the NHL shortly in the past. To make this list, you need to have your NHL debut so far this year. So, let's get into it.

Those are all the rookies, who have made their NHL debut so far this season. Auston Matthews leads all those rookies in points with 10, but both Matthews and Patrik Laine are part of a 4 way tie for most goals in the NHL so far. (Richard Panik and Alex Killorn are the other 2). If I missed out on anyone else, leave a comment below. But for now, so long.