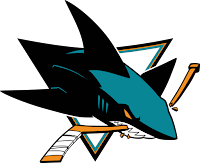 The reigning Western conference champions failed to beat the Pittsburgh Penguins in the Stanley Cup finals, but now they are better with the acquisitions of LW Mikkel Boedker and D David Schlemko. Boedker adds more scoring to an already filthy top 6. Schlemko adds more defensive depth after they lost Roman Polak (TOR) and Matt Tennyson (CAR). Backup goalie James Reimer signed with Florida, so Aaron Dell will get the chance to be the backup.
C/RW Joe Pavelski, C Joe Thornton, C Logan Couture, and LW Patrick Marleau lead an offense that shouldn't have trouble scoring goals. Brent (chewbacca) Burns and Marc-Edouard Vlasic lead a solid defense. Goalie Martin Jones' playoff run last season showed people that he's an elite goaltender. Time will tell how Aaron Dell plays in a backup role for someone who hasn't played in the NHL yet.
The Sharks didn't have a first round pick in the 2016 NHL draft because they traded it to Boston to acquire Jones.
The Sharks' projected lines look like this:

Finally, for my prediction, the San Jose Sharks, a team with both elite old and young players, will make the playoffs in 2016-17.
Posted by Carter at 9:30 PM