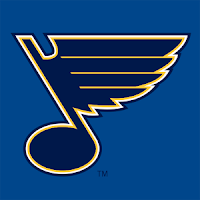 The St. Louis Blues' off-season was about in the middle of the pack. Their captain, David Backes left for Boston and RW Troy Brouwer went to Calgary plus C Steve Ott went to Detroit. While the loss of Backes was hard to replace, the Blues signed David Perron to replace Brouwer and Landon Ferraro to replace Ott. During pre-season, the Blues acquired former first overall pick Nail Yakupov from the Oilers for practically nothing. Last year's Blues' had Jake Allen and Brian Elliot fighting for the starting job. When the Blues traded Elliot to the Flames, the Blues then signing Carter Hutton to replace Elliot as the backup.
C Paul Stastny, LW Alexander Steen and Vladimir Tarasenko lead a very solid offense that can score. When your defensive core has Alex Pietrangelo, Kevin Shattenkirk, Jay Bouwmeester and Colton Parayko then you know it's amazing. The Blues' defense can shut down any team's offense whether it's Ovechkin's Capitals or Kane's Hawks, this defense is elite. In net is Jake Allen and Carter Hutton. Allen has shown to be a good goalie in the past and time will tell if he can be an actual starter.
In the first round of the 2016 NHL draft, the Blues selected C Tage Thompson with the 26th overall pick. The Blues had a bad feeling that they were going to lose Backes so they drafted another center. Thompson can turn out to be a solid player for the Blues in the future.
The Blues' projected lines look like this:
Alex Steen- Paul Stastny- Robby Fabbri
Vladimir Tarasenko- Jori Lehtera- David Perron
Dmitrij Jaskin- Patrik Berglund- Nail Yakupov
Scottie Upshall- Kyle Brodziak- Ryan Reaves

In net is Jake Allen and Carter Hutton.
LW Magnus Paajarvi, RW Ty Rattie and D Robert Bortuzzo are scratched and Jaden Schwartz is injured.
Finally, for my prediction, the St. Louis Blues, a good team on the rise, will make the playoffs in 2016-17.