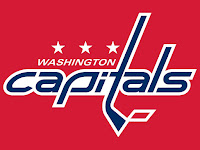 The Washington Capitals are coming off a presidents trophy win last season but once again they flopped in the second round and didn't make the conference finals. Besides the playoffs, the year was amazing for them. As I already said, the Capitals won the presidents trophy for best team in the NHL for the regular season. Also, LW and captain Alex Ovechkin won the Maurice Richard trophy (most goals) again. Goalie Braden Holtby won the Vezina trophy (best goalie). Plus center Evgeny Kuznetsov had a breakout year leading the team in points with 77. In the off-season, their main loss was when forward Jason Chimera signed with the Islanders. They signed RW Brett Connolly and traded for C Lars Eller.
Ovechkin, Kuznetsov, C Niklas Backstrom and RW T.J Oshie lead an amazing offense. John Carlson, Matt Niskanen and Karl Alzner lead a nice defensive core. Holtby is a top 3 goalie in the league but Philipp Grubauer isn't the greatest backup to have but he's okay.
In the first round of the 2016 NHL draft, the Capitals selected D Lucas Johansen with the 28th overall pick. With Karl Alzner's contract up this year, the Capitals went out and drafted another defenseman. Johansen will most likely be a top 4 defenseman in the future.
The Capitals' projected lines look like this:

In net is Braden Holtby and Philipp Grubauer.
RW Brett Connolly and D Taylor Chorney are scratched.
Finally, for my prediction, the Washington Capitals will make the playoffs in 2016-17.