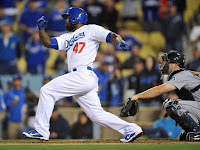 The Toronto Blue Jays have signed DH/1B Kendrys Morales to a 3 year, $33 mil deal. Also, in unrelated news, the Philadelphia Phillies have acquired 2B Howie Kendrick from the Los Angeles Dodgers in exchange for 1B Darin Ruf and 2B Darnell Sweeney. Let's get to details.

The Phillies-Dodgers trade is an interesting one. Days before, Kendrick wished to have a fulltime 2B job, after sharing it with Chase Utley this past year. Now that the Phillies have Kendrick, they have a chance to trade away 2B Cesar Hernandez, their former starter. What L.A. got in return? Sweeney mostly plays 2B so he's basically Kendrick's replacement. Also, he plays all 3 outfield positions, so he has value. Ruf is a backup 1B, in this case for Adrian Gonzalez, and can play the corner outfield positions if they want him too, because L.A. has solid outfield depth.
So that's how I recap the big signing and trade of today.