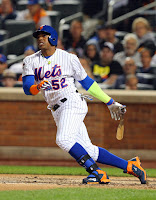 As the American Thanksgiving has passed, from now to about Christmas will be an explosion of players switching teams in the MLB. I'm here to predict which free agent who haven't signed yet will sign this off-season.
Yoenis Cespedes: Washington Nationals. It's uncetain which 4 teams are on Cespedes' "list" that he is most likely to join, besides the Mets. It's an "if" situation with all the teams pursuing Cespedes, including the Nats. The Nats would probably have to trade SS Danny Espinosa. Why? It's because their CF last year, ROY finalist Trea Turner would move to his natural position at shortstop, leaving Espinosa the odd man out.
Aroldis Chapman: New York Yankees. Yes, Chapman could and should break a record for a contract signed by a closer, but the Yankees have a lot of money to spend. Chapman also previously said "I'd love to be a Yankee again" this off-season. The Yankees, who had Chapman for most of the 2016 campaign, traded him to the world series winning Cubs for the cubs former top prospect Gleyber Torres and others. It would make sense for the Yankees to trade Chapman for a big-named prospect, then sign him for a little more money.
Kenley Jansen: Los Angeles Dodgers. The Dodgers goal this off-season was to "keep their stars and add righty bats", well one of those stars was Jansen, who along with Chapman can break the record for a contract signed by a closer. For Jansen, it would make sense to sign with the Dodgers, who are still competitive, and look to be for a very long time. 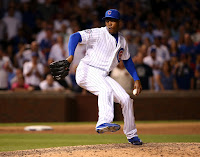 Edwin Encarnacion: Boston Red Sox. After the retirement of DH David Ortiz, getting Encarnacion, another DH, could cover that flaw. On Encarnacion's side, signing with a team who had made the playoffs last season, could fill what every player wants: To be on a contending team.
Jose Bautista: Toronto Blue Jays. After a down year in 2016, the Blue Jays still would like to retain Bautista. Also, a fan favorite in Canada, Bautista should like to stay.
Mark Melancon: San Francisco Giants. After a bad season by Santiago Casilla, the Giants have pursued Melancon. Not to mention that Casilla is also a free agent.
Mark Trumbo: Baltimore Orioles. The O's, who shocked many in 2016, would love to re-sign the guy who hit 47 bombs for them last year. Also, Trumbo would most likely love to play in Camden Yards again.
Justin Turner: Los Angeles Dodgers. The reasoning for the Dodgers to re-sign Turner is basically the same for Jansen. The Dodgers are still a competitive team, that have made it a goal to "retain their stars."
Dexter Fowler: New York Mets. After winning the World series with the Cubs, the Mets should have tons of interest in the CF if Cespedes leaves. Fowler could play center with Michael Comforto and Curtis Granderson on his sides, leaving Jay Bruce, who's entering a contract year, to be a trade asset.
So that's who I think will sign the big free agents this year. Who do you think they'll sign with? Leave your thoughts in the comments below. For now, that's it for me.