Around the NHL: Bolts' Callahan likely out for season 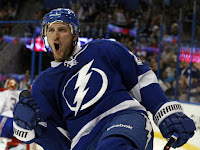 The Tampa Bay Lightning's 2015-16 season was great. Although they started off bad, they made game 7 of the eastern conference final without captain and superstar center Steven Stamkos. They then signed Stamkos to a 8 year extension, and prospect Jonathan Drouin, who previously requested a trade, rescinded his request.
But the 2016-17 season has been rough. They sit 6th in the Atlantic division with a record of 27-24-8 (62 points), and are 4 points behind the New York Islanders, who currently sit in the second wild card spot in the eastern conference. Stamkos is averaging over a points per game this season, with 20 of them (9 goals and 11 assists) in just 17 games. He last played on November 15, and just started to practice today. Star goalie Ben Bishop is an upcoming UFA, and has a GAA of 2.55 and a SV% of .911. He's also a possible trade target for other teams as the trade deadline looms.
More injury problems have occurred. Winger Ryan Callahan has 4 points (2 goals and 2 assists) in just 18 games this season, last playing on January 7. The 31 year is now marked out for the rest of the 2016-17 season after undergoing hip surgery to repair a labral tear. He had the exact same surgery done on his hip last year. Bolts GM Steve Yzerman said that the injury is expected not to be career threatening.
Forward Cory Conacher was recalled from Syracuse (AHL). Conacher, 27, has 2 points (a goal and an assist) in 7 NHL games this season. He has 44 points (12 goals and 32 assists) in 42 games this season in the AHL. He's played in the NHL for the Ottawa Senators, Buffalo Sabres and the New York Islanders previously. He played 35 games with the Bolts in 2012-13, before going to those three teams. He had 24 points (9 goals and 15 assists) that year.
Posted by Carter at 11:10 AM