Around the NHL: Iginla hopes to be traded; Avs claim defenseman, place another on waivers

The Colorado Avalanche have struggled a lot this season, being the only NHL team with less than 30 points in the campaign, with a record of 13-33-2 for just 28 points. Starting goalie Semyon Varlamov was terrible and went down with a season ending injury, and the defense in front of him has been very bad as well.
Former captain/Stanley Cup winner/current VP and GM Joe Sakic has been looking to acquire a defenseman, mostly a top 6 guy with 1 year left on his contract, and has also been shopping superstars Matt Duchene and Gabriel Landeskog, and previously trading grinder Cody McLeod to Nashville. (Read my previous post) Despite Duchene rumors to Nashville or the Islanders, the price tag for him is very high and I doubt he'll be traded. Anyway, today, some Avalanche news has broken out. Here's the latest on that news. 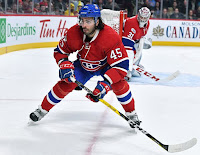 When the Montreal Canadiens placed defenseman Mark Barberio on waivers, they might not of thought he was going to be claimed. There was rumors of Winnipeg claiming him, (which I thought was going to happen)  but the avs stepped in and grabbed Barberio, and placed defenseman Eric Gelinas on waivers. (Who the Jets could also target) The 26 year old Barberio has 4 points (all assists) in 26 games this season, and is a +1, but it could be because habs goalie Carey Price has been fantastic for the first half of the year. The 25 year old Ontarian, Gelinas also has 26 games played this year, with 1assist (and 1 point) opposed to Barberio's 4. Gelinas is a -5 this season, 6 points behind Barberio, so Sakic chose Barberio over Gelinas, who was acquired on trade deadline day from the Devils last year.
In addition to that, when being asked about if he wanted to be traded from Colorado, winger Jarome Iginla replied "I would like to, at the deadline, go somewhere. I would like to be in the playoffs. I hope that there is some opportunity to go and play in the playoffs. Those are the best games, the most fun for sure, and you have a chance to win. So, no, I haven't given up on that chance to win." Iginla, 39, is going to be a UFA on July 1st. His last playoff experience was when he played with the Boston Bruins in 2014. He also captained the Calgary Flames to the 2004 Stanley Cup final, when they lost to the Tampa Bay Lightning in 7 games. He has 6 goals and 6 assists (12 points) and is a -17 in 48 games this season.
Other news: Sabres place C Cal O'Reilly on waivers, Devils place LW Luke Gazdic on waivers. GM Steve Yzerman says Lightning willing to make a trade; former Wild first rounder Alex Tuch to play NHL debut.
Posted by Carter at 10:38 PM