Around the NHL: Isles' Cizikas out with injury 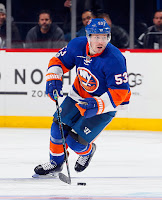 The New York Islanders' first half of the 2016-17 NHL season was horrendous. In late December/early January, the Isles started to play better. Then on January 17, 2017, the Isles fired head coach Jack Capuano, naming assistant coach Doug Weight interim head coach. Since then, the Isles have been VERY hot (they have a record 11-4-2 for 24 points). Now they sit in a three way tie for the second wild card spot in the eastern conference with the Florida Panthers and the Boston Bruins (all three teams have 66 points). The Panthers have a game in hand on both the Bruins and the Isles, so they sit in that spot. There's two problems that plague the Isles in their run for the playoffs. The first is their struggles on the road. This season, they have a putrid 8-13-4 road record (20 points). They're currently on a 9 game road streak, so they need to play better away from home. A 3-1 win over the Detroit Red Wings (in Detroit) Tuesday could show that they're better at road then they were a month ago, but a recent 7-1 loss in Toronto shows their road jitters aren't over quite yet. The second problem is injuries. Defenseman Travis Hamonic hasn't played since January 7, with a knee injury. In the game against Detroit, forwards Casey Cizikas and Cal Clutterbuck sat out the third period. Clutterbuck is expected to miss Thursday's game against Montreal, but no further injury has been announced (he played for the first time since February 3rd Tuesday, due to injury). The bad news is that Cizikas has a broken hand, and is expected to miss about 4 weeks or a month. Forward Shane Prince was placed on IR Wednesday (retroactive February 12), and F Bracken Kearns was recalled from Bridgeport (AHL). Cizikas, 25, has 7 goals and 16 assists (23 points), a +9 rating and 28 PIM in 53 games this season. Prince, 24, has 5 goals and 11 assists (16 points), a -7 rating and 18 PIM. Cizikas, along with Clutterbuck, are two elite forwards on the Isles PK unit. Being without both of them, even if it's only for a single game, would be a disaster for the Isles' penalty kill.
Posted by Carter at 8:06 PM