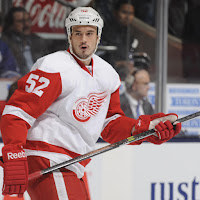 The Detroit Red Wings' streak of 25 consecutive playoff appearances looks to be coming to an end. With 54 points, the Wings are in a 3 way tie for last in the Eastern Conference (and in the Atlantic division) with the Buffalo Sabres and the Tampa Bay Lightning. D Jonathan Ericsson will also miss the next 6-8 weeks with a fractured wrist, head coach Jeff Blashill said. "I don't have a total timetable, but I know it's a fractured wrist so to me that would put him in that frame," Blashill also said. Ericsson was injured in the Red Wings' 6-3 loss to the Washington Capitals on Thursday on a boarding hit from Center Niklas Backstrom. Ericsson has 1 goal and 8 assists for 9 points and is a -2 this season. The goon also has 63 PIM in that span.
Good news for the Wings did occur Friday, though. Goalie Jimmy Howard was rehabbing for Grand Rapids (AHL) on Wednesday, when he tweaked his sprained right knee (which was the original injury). Luckily for the Wings, he is listed as just day to day currently. "I don't think it's anything serious. It's still day to day right now. We'll see where it's at," said Blashill after Howard was re-evaluated Thursday. He hasn't played for the Wings since December 20th, vs Tampa Bay, where he injured the knee.
Posted by Carter at 8:32 AM