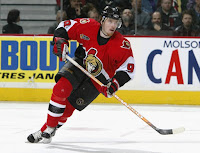 Forward Martin Havlat has announced his retirement from the NHL after 14 seasons. He played 2 games in 2016 with the St. Louis Blues, his last in the league. In the offseason and during the season, Havlat fought for a contract offer from a team, but never received one. The 35 year old played for the Ottawa Senators, Chicago Blackhawks, Minnesota Wild, San Jose Sharks, New Jersey Devils, and the Blues in a career that started in the '00-'01 season. He was drafted 26th overall by the Sens in 1999. He was also part of the Czech Republic team that won gold in the 2000 IIHF world championship. He had 242 goals and 352 assists for 594 points in 790 NHL games. "That was fast. I feel like I was just getting started in the NHL a short while ago," Havlat said. "I would love to continue playing but my body will not allow me to play at the level I expect from myself. I feel very fortunate to play in the NHL for 14 years. Rest assured, I am retiring as a grateful man. I will miss playing in the game I love so much. It is time to start a new chapter in my life." Havlat was a Calder trophy finalist in '00-'01 and was recently named to the Sens 25th anniversary team, which was decided by fans. His best season might of been '08-'09 with the Blackhawks, where he set career highs in assists (48), points (77), and plus-minus (+29). He was named team MVP that season for his efforts. .