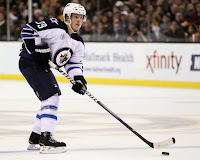 The Winnipeg Jets have had many pluses and minuses in the 2016-17 NHL season. A plus would be that rookie Patrik Laine has been nothing short of sensational, with 26 goals and 47 points in 51 games this year. He's also the youngest player in NHL history with 3 hatricks (2 against the Dallas Stars). Some minuses is that defenseman Tyler Myers has been out the last week, and should miss the next 5-7 weeks as well. Another minus is that the team is 5th in the Central division with points, and every other team has games in hand on them. The Nashville Predators, who are in 4th place, have 3 games in hand and 6 more points. Their defensive core took another big blow, when defenseman Toby Enstrom had surgery for an existing lower body injury, and will miss the next 2-3 weeks to recover. In 55 games this season, Enstrom has 1 goal and 13 assists (14 points) and is a -3. Enstrom, 32, has played his entire career with the franchise, making his debut in 2007-08 with the Atlanta Thrashers (who then relocated to become the Jets). With the injuries of Myers and Enstrom, the Jets have made a lot of call ups, and guys like Ben Chiarot, Paul Postma and Julian Melchiori have gotten chances with the big club. "We just got to the point that we thought the rehab on it would be at least that long and at the end, we still wouldn't know if we would have a healthy player," head coach Paul Maurice on said on the injury.