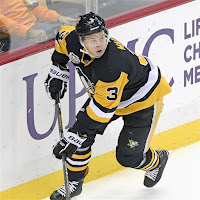 Ever since December 12, 2015, the Pittsburgh Penguins have been the best hockey team in the NHL. That day marks when the Penguins fired head coach Mike Johnston, replacing him with Mike Sullivan. The Penguins went on to win the Stanley Cup that season, and are doing really nice in 2016-17, with a record of 36-13-7 (79 points), good enough for 2nd place in the Metropolitan division. They have that record even though stars Evgeni Malkin, Matt Murray and Kris Letang have missed significant time due to injury. Another injury has come across their roster, as it was announced that defenseman Olli Maatta will miss the next 6 weeks after undergoing surgery to repair a hand injury. The 22 year old is in his 4th season in the NHL (all with Pittsburgh), and has 1 goal and 6 assists (7 points) in 54 games this season. He's also a +17. The injury occurred when Winnipeg Jets center Adam Lowry hit him in Thursday's 4-3 OT winner. Penguins center Sidney Crosby scored point #1,000 in the game. Penguins defenseman Justin Schultz sat out the 3rd period Thursday, but no word on him has been announced yet. To replace Maatta (and maybe even Schultz), the Penguins recalled defensemen Cameron Gaunce and Steve Oleksy from Wilkes-Barre/Scranton (AHL). The 26 year old Gaunce has 2 assists and is a +3 in 3 games earlier this season for the Penguins. In 47 games in the AHL, Gaunce has 13 points and is a +15. Oleksy, 31, has an assist, a +2 rating in 9 NHL games this season.
Posted by Carter at 4:52 PM