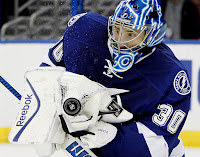 The Los Angeles Kings have acquired goalie Ben Bishop and a 5th round draft pick in the 2017 NHL draft from the Tampa Bay Lightning in exchange for goalie Peter Budaj, defenseman Erik Cernak, a 7th round draft pick in the 2017 NHL draft, and a conditional pick in the same draft, but the round hasn't been announced. The Lightning will also retain 20% of Bishop's contract. Let's get into details.
The Kings' starting goalie for the past couple of years, Jonathan Quick, was injured on opening night, and just returned yesterday. They have a tough schedule ahead, with many back-to-back games. With 2 reliable starters with great playoff experience (Quick won 2 Cups with LA, and Bishop has played in the finals before), the Kings can now make a serious run for the playoffs. They sit fifth in the Pacific division with 64 points (a record 30-27-4), and 3 points out of the 2nd wild card spot in the Western conference. Budaj has played great this season, but with both Quick and Bishop, he wasn't needed. Cernak isn't close to the NHL, and a 7th round pick isn't much. Bishop, 30, has a GAA of 2.55 and a SV% of .911 in 31 starts this season.
The Lightning reached the Stanley Cup finals in 2015, but lost to the Chicago Blackhawks. In 2017, they were missing star Steven Stamkos, but still made it to game 7 of the Eastern conference finals, before losing to the Pittsburgh Penguins. They've dropped off a lot this season, though. Stamkos was injured again, and the club sits 7 points out of a playoff spot (they have 62 points, with a record of 27-25-8). Bishop has been the Bolts' number 1 goalie for years now, but he's an upcoming UFA, and Andrei Vasilevskiy seems to be the goalie of the future for them at 22 years of age. Bishop was major trade bait. Budaj can be Vasilevskiy's backup for the next couple of months. Cernak was drafted in the second round just 2 years ago, so he can be a solid prospect for Tampa Bay. Budaj, 34, has a GAA of 2.12 and a SV% of .917 in 51 starts this season in Quick's absence. Cernak, 19, has never played professional yet. He'll probably play for the Syracuse Crunch (the Lightning's AHL affiliate) next season, when he's 20.
Posted by Carter at 8:48 PM