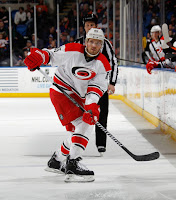 The Pittsburgh Penguins have acquired defenseman Ron Hainsey from the Carolina Hurricanes in exchange for a second round pick in 2017 and forward Danny Kristo. ESPN's Pierre Lebrun reports that the Canes will retain 50% of Hainsey's $2.83 million contract. Let's get into details.
The Pens were Stanley Cup champs in 2016, and look poised to at least make the playoffs in 2017 with 82 points (a record of 37-14-8), and are in second place in the Metropolitan division. But they have injury problems with their defenseman. It was recently announced that defenseman Trever Daley will miss 6 weeks, and underwent knee surgery. Another defenseman in Olli Maatta will also miss 6 weeks. The second round pick is the main thing they surrender, and the prospect, Kristo, is the cherry on top of the deal. Hainsey, 35, has 4 goals and 10 assists (14 points), a -17 rating, and 17 PIM in 56 games this season.
The Canes are currently in a rebuild. They are currently last in the eastern conference with 56 points (a record of 24-24-8), and GM Ron Francis is looking to make trades this deadline, already making a trade for defenseman Phillip Samuelsson. Hainsey is an upcoming UFA, and was major trade bait for teams. Hainsey has the record for most games played without a single playoff game (891 career games). Being on Pittsburgh can end that streak. The Canes now have 10 picks in the 2017 draft, 6 in the first 3 rounds. Kristo, the prospect has never played in the NHL, but has been in the St. Louis Blues organization until this year, when he went to Pittsburgh. The 26 year old has 11 points (6 goals and 5 assists) in 32 games for Wilkes-Barre/Scranton (AHL) this season. He also had a +2 rating and 10 PIM for them.