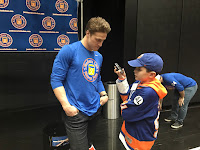 On March 18, 2017, I had the pleasure of attending New York Islanders winger Anders Lee's first Jam Kancer In the Kan event. JamKancerIntheKan.com is a site where people put up a fundraising page, then people donate money for pediatric cancer research. Then, those people compete in a Kan Jam tournament (Kan Jam is a Frisbee game where people aim to throw the Frisbee at a garbage can looking can). Thirty-two teams of players and fans competed in an elimination tournament, with Islanders fans Keith Lavitt and his cousin Josh Rosenberg defeating captain John Tavares and defenseman Scott Mayfield in the finals. In all, the event raised over $90,000, and Lee said it turned out better than expectations. "With how much money we raised and the turnout, you can't ask for anything more for sure," Lee said via NHL.com
Lee wasn't the only Islander player enjoying the event. Every single Islander was at the event. When I asked Tavares about the event, he said: "As a teammate, you want to support Anders and obviously it's for a great cause, to fight cancer. We all love being here and we love supporting him and the cause he's fighting for. It's great to be here and we're having a lot of fun. It's always great to be around your teammates and our great fans."
Tavares and Lee were joined by their line mate Josh Bailey, who had this to say, "it was something we were all happy to join Anders with and to help towards a good cause. Any time you can give back to the local community, especially kids who are going through a tough time, it's always a great thing,"
Sixteen year-old Fenov Pierre-Louis, who has been battling Stage 4 Neuroblastoma since he was 9, gave a passionate speech before the event started. Even rookie Joshua Ho-Sang said it was a great speech. "That young man who spoke was absolutely extraordinary, he talked about his battle with cancer, and it's really good for the players to grab some prospective. When you can see boys who have fought through and struggled with cancer, you can see the way they battled adversity. It's easy to grab some inspiration and courage from them and keep on moving forward.
The man who organized this event, Anders Lee, is having a career season for the Islanders. He has career highs in goals (26) and points (42). He has more goals than many players this season, including the league leader in points, Connor McDavid. The St. Paul, Minnesota native was drafted 152 overall (6th round) in the 2009 NHL draft. He was a multi-sport athlete, winning the 2008 Gatorade Minnesota football player of the year award, before attending Notre Dame to play hockey. Now that he's found success in the NHL, he's now giving back to the community. "One of our proudest moments is knowing that he's learning to give back," Lee's father, Tom Lee said. Lee was able to get all 24 of his teammates to attend, showing how important he is to his teammates. "It was a fun event. It just shows how great Anders is as a person," rookie Anthony Beauvillier said.
During the event, I had the pleasure to interview Lee, both about this event, and the team's play. Here's what I asked him.

Me: "How does it feel to organize this event?"
Lee: "It really cool. I'm really happy that we were able to get this many people to join in and fundraise. It's a special day, and [I'm] really looking forward to the future."

M: "Because you score most of your goals from deflections in front of the net, is that why you chose Kan Jam, a game where you deflect the Frisbee into a can, for your fundraising event?
L: That's a wonderful connection you made, but I didn't look at it that way. But it fits into the way I play hockey."

M: "How do you think the team has changed from December to now, going from last place to a playoff battle"?
L: "We've climbed out of a hole that we dug early in the season. We've really come around and been a really good team of late, so it's nice to be back in the hunt."

M: "How do you think Joshua Ho-Sang has impacted the team in his 10 games?"
L: " You can tell by the way he handles the puck, how skilled he is and the vision that he has on the ice. He's been a great addition to our team."
Posted by Carter at 3:30 PM