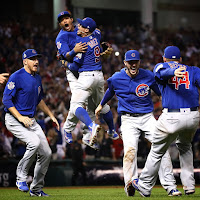 Biggest move: The Cubs and the Kansas City Royals pulled off a blockbuster, sending a big closer in Wade Davis to the windy city in exchange for a power hitting outfielder in Jorge Soler. Watch Davis dominate in 2017.
X-factor: When the Cubs signed outfielder Jason Heyward to a big deal, they expected big numbers. But Heyward dropped off significantly. In 2015, he had an average of .293. In 2016, he had an average of .230. He dropped from 23 SBs in 2015 to 11 in 2016. He also had 6 less HRs and 11 less RBIs in 2016. With outfielder Dexter Fowler gone, Heyward will play a bigger role in 2017 than he did in 2016.
Biggest bounce back: Not many players on last year's Cubs team underperformed, besides Heyward. But pitcher Eddie Butler was acquired from the Colorado Rockies in the offseason, in hopes of a change of scenery helping him. The Rox had high hopes for him, but his 7.17 ERA in 64 innings last year showed them he needed to be out. He'll probably not get a spot in the rotation this year, but I imagine him being successful in a swingman role in 2017.
Biggest breakout: The Cubs have high hopes for the big left handed pitcher Mike Montgomery, that they are likely to expand their rotation to 6 starters this year. Montgomery had a 2.52 ERA in exactly 100 innings last year with the Cubs and the Seattle Mariners. Expect him to flourish in 2017.
Guaranteed star: Over the past two seasons, reining NL MVP Kris Bryant has an average of .284, 65 HRs and 201 RBIs. He's also entering his age 25 season. If he continues on this pace for another 10+ years, he'll be heading to Cooperstown.
The Cubs' starting lineup should look like this.

OFs Matt Szczur, Jon Jay, Albert Almora, C Miguel Montero and 3B Tommy La Stella will be on the bench.
Wade Davis will be their closer, with Carl Edwards and Hector Rondon setting him up.
For my prediction, the Cubs will once again win the NL Central, but lose to the Indians in a WS rematch.
Posted by Carter at 6:11 PM