Getting to know Beau: my interview with Isles Anthony Beauvillier 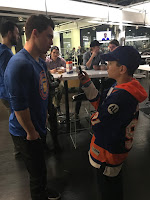 When a team drafts a player in the first round, they expect him to at least make the NHL (or MLB, NFL, NBA, or whatever league there is with a draft). When the New York Islanders drafted Anthony Beauvillier 28th overall in 2015, they expected him to make the team eventually. They did not expect he would make it the next season. But on opening night, 2016, Beauvillier made his debut at just 19 years of age. The Sorel-Tracy, Quebec native has 21 points (8 goals and 13 assists) in 57 games this season, and in his career. He quickly made it to the NHL after tearing it up for the Shawinigan Cataractes of the QMJHL for three seasons.
At his teammate Anders Lee's Kan Jam event, I was able to catch up with "Beau", or "Tito". Here's what I asked him.

Me: "What do you think of this event Anders Lee is running?"
Beauvillier: "It's something special. It was a fun event. It shows how great Anders is as a person. It was a great event, it was a great night."

M: Was it tough to make the change from the QMJHL to the NHL without having any experience in the AHL?"
B: "Yes, it's special. It's a big step. I'm living my dream. I enjoy every single day."

M: "How has the team changed from December to now?"
B: "We've worked our way through. We're exactly where we want to be right now. We want to keep pushing. The next couple of weeks are going to be really important for us, important games for us. Like I said, this is where we want to be. It's very exciting to play, and this is going to be fun."
Posted by Carter at 2:32 PM