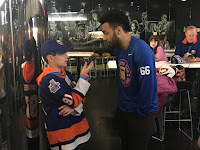 He might be just 10 games into his NHL career, but New York Islanders' winger Joshua Ho-Sang has made an impact on his team, with 6 points (3 goals and 3 assists) in those 10 games. Ho-Sang, 21, was drafted in the first round (28th overall) in the 2014 NHL draft. He played for the Windsor Spitfires and the Niagara IceDogs in the OHL, before playing 48 games for the Bridgeport Sound Tigers (the Islanders AHL affiliate) earlier this season. In his 10 games, the Thornhill, Ontario native has made a good impression not just on the organization, but on fans as well with his dynamic skating and stick-handling. When I talked to his Islander teammates, they had some positive things to say about him.
"Josh is very skilled, very talented. He's playing hard, he's being very responsible with what the coaching staff's asking him to do," captain John Tavares said on Ho-Sang.
"He's pretty electric. He makes a lot of plays out there, a lot of skill," winger Brock Nelson said.

At his teammate Anders Lee's Jam Kancer In the Kan event, I was able to catch up with Joshua. Here's what I asked him.

Me: "How does it feel to change from being in the AHL trying to impress the Islanders management to suddenly being in the NHL playoff race?"
Ho-Sang: "It's pretty crazy. You just need to keep your head on your shoulders, it's the biggest thing. You got to try to contribute where you can and fit in right away. You're playing with a different team, different system, different coaches, different players. The faster you can adjust, the better you'll do."

M: "How do you feel about this event Anders Lee is doing right now?"
HS: "It's obviously really special. I don't know if you got the speech at the beginning, but that young man [Fenov Pierre-Louis] who spoke was absolutely extraordinary. He talks about his battle with cancer, and I think that's really good for the players to grab some prospective. Obviously as professional athletes, this is our job, so we're very focused on the hockey and we take it all to heart. But when you can you can see something like this, you can see boys who have fought through and struggled [with] cancer, and you can see that the way they battle adversity, it's pretty easy to grab some inspiration, some courage from them and keep on moving forward."

M: "Ever since you've been called up from the AHL, people have been giving you grief for wearing #66. Does that bother you at all?"
HS: "No it doesn't bother me. I think events like kind of show how important the number 66 is. You get to take a look at a boy who's been battling cancer, and you think he cares about the number 66? Not really. I think that at the end of the day there's a lot of bigger things going on in the world. I think it's important to focus on those things, rather than the number. I understand that Mario Lemieux was an extraordinary player, and for me it's just a way to pay tribute. But at the end of the day, I know that it was a big deal when I first came up, but I'm 10 games in to my NHL career, and in the nicest way people kind of need to get over that, and they need to focus on the bigger picture. It's about kids who struggle, kids who don't have food at night, kids who are going through cancer situations. People don't need to focus on my number, they need to focus on the bigger things in the world."
Posted by Carter at 6:40 PM