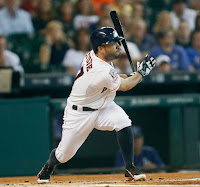 With a record of 84-78, the Houston Astros finished 3rd in the AL West, 11 GB of the first place Texas Rangers. They also missed the playoffs. Last season was a little disappointing considering the year before SS Carlos Correa won AL ROY, but positives came out of 2016. 3B Alex Bregman had a solid rookie season, and MVP caliber 2B Jose Altuve had a power breakout. GM Jeff Luhnow made some moves, making Houston an offseason winner. Let's look at what Luhnow did.

Biggest move: The Astros had a couple decent moves this offseason. They signed OFs Josh Reddick and Carlos Beltran. But the biggest move they made in my opinion was filling their need for a catcher, by trading two pitching prospects to the New York Yankees for Brian McCann. McCann has hit at least 20 homers in each of the last 9 seasons. He has been named to 7 all-star games, and has won 6 silver sluggers in both the American and National league.
X-factor: After winning the Cy Young in 2015, a bad season for ace Dallas Keuchel had the Astros in talks with the White Sox for SP Jose Quintana. In 2016, he had an ERA of 4.55 in 168 innings. He's a big part of this Astros roster, and there's no denying it.
Biggest bounce back: In both 2014 and 2015, RP Ken Giles had an ERA of 1.80 or less for the Philadelphia Phillies. The Astros liked what he did, and traded young pitchers Vincent Velasquez and Mark Appel plus others for the now 26 year old. Giles underperformed, with a 4.11 ERA in 65.2 IP. They'll need him to bounce back.
Biggest breakout: In 201 ABs to start his MLB career off (all in 2016), 3B Alex Bregman hit .264 and 8 HRs. 2017 will be his first full MLB season, and he can really breakout. He turns 23 a couple days before opening day as well.
Guaranteed star: In every full MLB season, 2B Jose Altuve stole at least 30 bases, including a whopping 56 in 2014. He has also hit over .290 4 times. His biggest flaw was power. In 2015, he hit career highs with 15 HRs and 66 RBIs. In 2016, he really broke out. His HR and RBI career highs increased to 24 and 96. He also hit .338, another career high. He might be just 5'6'', but Altuve is still great.
The Astros lineup should look like this.

LF Nori Aoki, 1B Marwin Gonzalez and 1B A.J. Reed will be on the bench.
Ken Giles will be their closer, with Luke Gregerson and Will Harris setting him up.

For my prediction, I think the Astros will perform better in 2017, and contend for the wild card, but miss the playoffs by no further than 4 games.
Posted by Carter at 9:38 AM