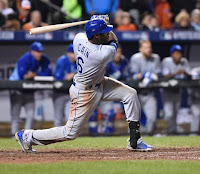 With a record of 81-81, the Kansas City Royals finished 3rd in the AL Central, 13.5 GB of the first place Cleveland Indians. Since their 2015 World Series win, the Royals have really dropped off. They have some players entering their walk years, including 1B Eric Hosmer. The Royals suffered a huge loss in the offseason, when SP Yordano "Ace" Ventura passed away in a car crash. To rebound from that death, GM Dayton Moore made some moves. Let's look at what Moore did.


Biggest move: The Royals signed two SPs in Travis Wood and Jason Hammel to replace Ventura. But the real biggest move was sending closer Wade Davis to the Cubs for outfielder Jorge Soler. Soler didn't get a real starting job in Chicago, something he'll get in Kansas City. Expect a breakout season for the OF.
X-factor: Without Ventura, the Royals will need SP Danny Duffy to step up and be their ace. He set a career high in Ks (188) in 2016. He can reach 200 IP for the first time in his career, and have an ERA under 4 in 2017.
Biggest bounce back: After breaking out in 2014, SS Alcides Escobar has had weaker years in 2015 and 2016. In 2014, he racked up 31 SBs. He had 17 in both 2015 and 2016. The only real positive that came out of 2016 was that he set career highs in HRs (7) and RBIs (55). Escobar should get back on track in 2017.
Biggest breakout: Like I mentioned in the biggest move, Jorge Soler should breakout in 2017. His career highs in Abs (366), HRs (12) and RBIs (47) aren't impressive. With a full time job in 2017, Soler can hit at least 15 HRs and 50 RBIs for the first time.
Guaranteed star: The Royals don't have that MVP or Cy Young winner like their rivals the Detroit Tigers and the Cleveland Indians do, but CF Lorenzo Cain is a solid player. His best season was 2015, where he recorded an average of .307, 16 HRs and 72 RBIs, not to mention 28 SBs. He slightly dropped off in 2016, but he's still good. he's also a top 5 fielder in the game.
The Royals lineup should look like this.

OF Paulo Orlando, 3B Cheslor Cuthbert, C Drew Butera and 2B Christian Colon will be on the bench.
Kelvin Herrera will be their closer, with Joakim Soria and Matt Strahm setting him up.

Finally, for my prediction, I think the Kansas City Royals will once again finish 3rd in the AL Central with a record around .500.