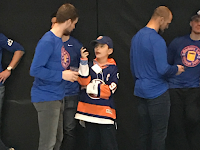 Of the many new advanced metrics in the NHL (or any hockey league), shot blocking is a very important one. Defensive skaters like to block opponents' shots, so their goaltender doesn't have to. Each NHL team wants to block shots. On the New York Islanders, no one wants to block shots more than defenseman Calvin de Haan. The Carp, Ontario native is 4th in the NHL in blocked shots, with 175. The Islanders drafted him 12th overall in the 2009 draft, after trading up for him. de Haan, 25, has 65 points (11 goals and 54 assists) in 263 career NHL games. He has career highs in goals (5), assists (16), and of course points (21) this season (2016-17). In 2016-17, the Islanders have watched de Haan change from a 4/5th defenseman to their 3rd best d-man.
At his teammate Anders Lee's Kan Jam event, I was able to catch up with de Haan. Here's what I asked him.

Me: "How has the team changed from December to now?"
de Haan: "Not at all, really. It's something that was one of our goals at the start of the season was to make the playoffs. We didn't have the greatest start that we wanted. We've been working hard lately. We've been fortunate enough to get back into the race.

M: "How has blocking shots become a big part of your game plan?"
dH: "It's something I've always taken pride in. The less work the goaltenders have to do, it's one thing that's better. It's part of our system. It's not just me, there's a lot of guys who do that on our team."

M: "What do you feel about this event Anders Lee is running?"
dH: "It's for a great cause. It's the least we can do. Obviously some [people] are in unfortunate positions. We're just trying to help out children and other individuals who may not be as fortunate as we are. Those kids don't take things for granted, and it's nice to see them smile.
Posted by Carter at 6:40 PM