My interview with Isles Josh Bailey 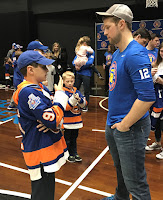 If an NHL team wants to have a chance at winning the Stanley Cup, they need a top line center. The New York Islanders have that in John Tavares. A team also needs a number one defenseman. The Islanders also have that in Nick Leddy. Another thing a team needs is a number one winger. The Isles have adopted to having 27 year old Josh Bailey as their top winger. The Isles drafted Bailey 9th overall in the 2008 draft. The Bowmanville, Ontario native has exactly 300 points (105 goals and 195 assists) in 630 career NHL games, all for the Islanders. He is having a career season currently, with career highs in assists (38) and points (50).

At his teammate Anders Lee's Kan Jam event, I was able to catch up with Bailey. Here's what I asked him.

Me: "What do you think of this event Anders Lee is running?
Bailey: "I think it's great. I think Anders has put a lot of work into this. It was something we were all happy to join him with, to help towards a good cause. Any time you can give back to the local community, especially kids who are going through a tough time is always a great thing."

M: "How do you think the team has changed from December to now?"
B: "I don't think I'd say much changed. We always believed we can be here, and give ourselves a chance to make the playoffs, and try to win a Stanley Cup. [We] still have 11 games* to go. They are going to be the hardest ones yet. We want to play our best."

M: "You are having a career season this year, has
captain John Tavares affected it at all?"
B: "Of course he does. He's one of the best players in the league, and in the world. He's fun to play with every night. He makes a lot of great plays. Anders [Lee does] as well. It's been a lot of fun playing with those two this year. We just want to play our best hockey for the next couple of games.

*This interview was recorded before their games against the New York Rangers and Pittsburgh Penguins. They now have 9 games remaining.
Posted by Carter at 12:13 PM