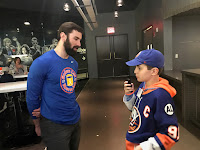 Every NHL team needs a puck-moving defenseman. The New York Islanders have one of them. The 26 year old Nick Leddy has turned into a 40 point d-man, with exactly 40 points in 71 games so far in the 2016-17 season (he has 11 goals, a career high, and 29 assists). The Eden Prairie, Minnesota native was drafted 16th overall in 2009 by his home town Minnesota Wild. Before he made his NHL debut, the Wild traded Leddy's rights and defenseman Kim Johnsson to the Chicago Blackhawks for defenseman Cam Barker on February 12, 2010. He then signed a 3 year, $2.7 million contract. In 4 seasons with the Blackhawks, Leddy scored 93 points (20 goals and 73 assists) and won the 2013 Stanley Cup. But at the end of the 2014-15 season, Leddy would become a restricted free agent, and the Blackhawks didn't have cap room for him. On October 4, 2014, the Blackhawks traded Leddy and goalie Kent Simpson to the New York Islanders in exchange for defensemen Ville Pokka, T.J. Brennan and goalie Anders Nilsson. On February 24, 2015, Leddy and the Islanders agreed to a 7 year, $38.5 million contract extension. He has 26 goals and 91 assists in 3 seasons since joining the Islanders. At his teammate Anders Lee's Kan Jam event, I was able to meet Nick. Here's what I asked him.

Me: "How has the team changed since December to now?"
Leddy: "Every point counts, especially at this point in the season. Hopefully we'll get back on the winning track."

M: "What do you think Joshua Ho-Sang has brought to the team in his 10 games?"
L: " I think he brings an element to the offense, where he's got a lot of skill, amazing hands and has that pull away speed. He's obviously a great playmaker. We're definitely happy to have him.

M: "What do think of this event Anders Lee is running?"
L: "I think it's awesome. Anytime we can support a teammate and something he truly believes in, it's something we want to help with."
Posted by Carter at 10:00 PM