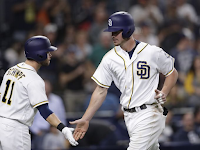 With a record of 68-94, the San Diego Padres finished last in the NL West, 23 GB of the first place Los Angeles Dodgers. Former Tampa Bay Rays top prospect Wil Myers had a breakout year for the Padres, with 28 HRs and 28 SBs. The Padres will most likely be awful in 2017. GM A.J. Preller has always made trades when he needs to. Let's look at what Preller did.

Biggest move: The Padres signed 2 starters that I'll note to small contracts. They signed Trevor Cahill to a one year, $1.75 million deal, and former Angels ace Jered Weaver to a one year, $3 million deal. These are both "prove it" deals, and Weaver can also be a great mentor for their younger pitchers.
X-factor: After the Padres traded former all-star Chase Headley to the New York Yankees, Headley struggled. The guy who they got for Headley, 3B Yangervis Solarte, is doing better. In 2016, Solarte set career highs in HRs (15), RBIs (71) and average (.286). He's one of the only solid players on this team. He's often overlooked by the bad part of this club.
Biggest bounce back: The entire team. Well, most of it. The one I'll highlight is Jarred Cosart. In 2014, Cosart had a 3.69 ERA in 180.1 innings. In 57 innings last year, Cosart had a 6.00 ERA. Cosart might not get a rotation spot, but if he does, he needs to pitch in at least 100 innings for the first time since '14.
Biggest breakout: Out of their 4 outfielders, their 4th outfielder Alex Dickerson is the oldest at 26 years of age. One of their outfielders will breakout in 2017. That's 22 year old Manuel Margot. He was named baseball's number 1 fielding prospect. He made his MLB debut in 2016, with 3 RBIs and a .243 average in 37 ABs. A full MLB season can really help Margot's development.
Guaranteed star: The only one on this team who you can even call a "star" is Wil Myers. Like I said before, his 28 HRs and SBs in 2016 are something to even improve on in 2016.
The Padres lineup should look like this.

2B Cory Spangenberg, SS Luis Sardinas, LF Alex Dickerson (injured), RF Jabari Blash and C Luis Torrens will be on the bench.
Brandon Maurer will be their closer, with Carter Capps and Brad Hand setting him up.

Finally, for my prediction, I think the Padres will lose at least 100 games in 2017. they'll be the only team to do that. In a couple of years, they'll start to exit the rebuild.
Posted by Carter at 10:13 AM