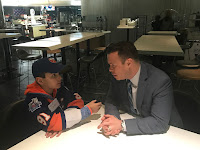 If you're a fan of the New York Islanders, you might have noticed their TV voice has changed this season. Yesterday, I had the pleasure of interviewing Islanders play-by-play announcer Brendan Burke at Islanders winger Anders Lee's Jam Kancer in the Kan event. Burke, 32, spent ten years in the minor leagues before being named as the Islanders broadcaster before the 2016-17 season. He was the voice of the ECHL's Wheeling Nailers, before calling games for the AHL's Peoria Rivermen (the affiliate of the St. Louis Blues, but now are called the Chicago Wolves) for 5 seasons, then the Utica Comets of the AHL (the Vancouver Canucks affiliate) for the other 3. He won the AHL's "most outstanding media member" in the 2014-15 season. He has also called college football and basketball for FOX sports.

Here are some of the questions I asked him.

Me: How did you get into broadcasting?
Burke: "My Dad was a sportswriter, so I grew up around the sports media world and [I] decided at a young age that I thought being a broadcaster would be a cool job. So, I've worked really hard at it, and here I am."

M: "Did you find it tough taking over for Howie Rose, who had been the Isles broadcaster for decades?"
B: "Yeah. He was there for 20 years, which is tough to replace somebody like that, and I'm not trying to replace him, I'm just trying to make fans happy even though he's not here. I got a phone call from him before I went on the air for the first time and he gave me some good advice and said 'don't act like you're filling in for anybody, this is your job'. And so I've taken that to heart and I've had a lot of fun here taking over for Howie and he's been a great resource for me and has been very encouraging throughout the season."

M: "How do you think since the firing of Jack Capuano the team has changed."
B: "I think that certainly when the coach gets fired there's always a mood change and I think the guys have responded. It looked like it gave them a little bit of energy and then just a little tweaks both in the defensive zone and with the player personnel. I think a lot of what [interim head coach] Doug Weight's success has been is that he's really good in relationships and with talking to his players and one on one, and the guys have responded to that. So I think there's been some tweaks, X's and O's but I think a lot of their success has come from Doug Weight, specifically his relationships with the players and the response they have had from that."

M: In the last 10 games, Joshua Ho-Sang has made a big difference to the team. What notes do you have on him?
B: I think that the crowd gets a little excited every time he touches the puck. I think he gets excited when he touches the puck. He's 10 games into his NHL career, and you can see he lights up when he gets the puck and he's been electric with it. So I think when you're first starting in the NHL, you just want to fit in, you don't want to stand out in necessarily a bad way, so you're just looking to fit in and I think he's done that extremely well. He's showed he can play in this league and I think he's only going to get better from here on out."

M: "How do you feel about Anders Lee and this big event that he's having?"
B: "This is great. I think that any time there's events like this, for the community, and of course raising money for childhood cancer is incredible.  But I think there's a difference when this is not the New York Islanders saying 'you need to be here', this is Anders Lee wanting to do something and his teammates wanting to help with it, and I think that's a big part of it. It's great to see the big turnout and it's great to see the amount of money raised. It's also great to see the first of what hopefully is an annual event that Anders and everybody gets to enjoy for a long time."

Big thank you to Brendan for taking the time to do this interview. Follow him on Twitter @brendanmburke.