Every defenseman dreams of winning the Norris trophy (best defenseman). The NHL announced the three defenseman who are finalists for the Norris trophy. They are Brent Burns of the San Jose Sharks, Erik Karlsson of the Ottawa Senators and Victor Hedman of the Tampa Bay Lightning.

Burns was drafted as a forward, and by a look of his stats, you would have never guessed he switched to a defenseman. For the third straight season, Burns played in all 82 games. This year, he set a career high in points with 76 (29 goals and 47 assists). He was also a +19. 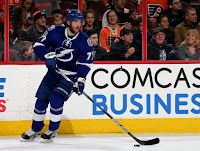 Many people said 2015-16 was Hedman's breakout year, with 47 points, leading the Bolts to the eastern conference finals. In 2016-17, he had a better year scoring-wise. Hedman scored more points than Karlsson but less than Burns with 72 (16 goals and 56 assists). He was only a +3, as the Bolts struggled in net.

I think Burns will win. Now, scoring is a bigger factor in winning the Norris than it was when Bobby Orr was around. Burns nearly scored 30 goals and 80 points. "Chewbacca" should win his first Norris this year.