My interview with Dennis Seidenberg 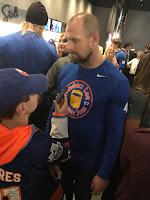 Dennis Seidenberg has had a long NHL career. The Schwenninggen, Germany native was drafted 172nd overall (6th round) by the Philadelphia Flyers in the 2001 NHL draft. 20 points (6 goals and 14 assists) and 92 games later, Seidenberg was traded to the Phoenix Coyotes (now the Arizona Coyotes) for Petr Nedved. Both teams received 2006 4th rounders in the deal. Seidenberg played just 66 games for Phoenix, scoring 13 points (2 goals and 11 assists). He was then traded to the Carolina Hurricanes for Kevyn Adams. Seidenberg had 51 points (6 goals and 45 assists) in 137 games with the Canes. When he hit free agency, Seidenberg, 35, signed a one year, $2.25 million deal with the Florida Panthers. He scored 23 points (2 goals and 21 assists) in 62 games with them. That season, the Panthers traded him and Matt Bartkowski to the Boston Bruins for Byron Bitz, Craig Weller and a 2nd round pick. In Boston, Seidenberg did something he failed to do with his other teams: stick along for awhile. He played 401 games for the B's, with 117 points (23 goals and 94 assists). The Bruins bought out Seidenberg after the 2015-16 season, and he signed with the New York Islanders to a one year, $1 million deal. In his only season (so far) as an Islander, Seidenberg has 22 points (5 goals and 17 assists). In his NHL career, Seidenberg has 246 points (44 goals and 202 assists) in 830 games.
At his teammate Anders Lee's Kan Jam event, I was able to catch up with Dennis. Here are the questions I asked him.

Me: "How has the team changed from December to now?"
Seidenberg: "At the beginning we didn't play as a team, and we made a lot of mistakes. Halfway through the season we started to play better, and come together more as a team. We started to be more successful. I hope we make the playoffs*

M: "You signed with the Isles during the World Cup of Hockey, when training camp started. Was it tough to sign very close to the start of the season?
S: "It wasn't very hard. It was nerve-racking because I would've liked to know where I'm going right before the world cup. It is what it is. I'm here, and I'm enjoying my season. Hopefully I stay here.

*They are eliminated from the playoffs now, but were still in contention on March 18, when this was recorded.
Posted by Carter at 4:31 PM