My interview with Alan Quine 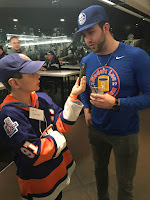 Not many NHL players have the luxury of getting drafted. New York Islanders center Alan Quine is on the extremely short list of players who were drafted TWICE. The Belleville, Ontario native was drafted 85th overall (3rd round) of the 2011 NHL draft by the Detroit Red Wings. However, he did not sign with the Wings. So, he was eligible to be drafted again. In the 2013 draft, the New York Islanders took him in the 6th round, 166th overall. This time, Quine signed. When the Islanders wanted to rest their stars at the end of the 2015-16 season, after they clinched the playoffs, the recalled Quine for the final two games, the first of his NHL career. Quine scored in the first one. The team was impressed, and started Quine in the playoffs. In double OT of game 5 of round one against the Florida Panthers, Quine scored a PP goal, winning the game. The next game was won by the Isles, clinching their first playoff series win in 23 years. In 63 career NHL games (all for the Islanders) that year and the next one, Quine scored 19 points, with 6 goals and 13 assists.
At his teammate Anders Lee's Kan Jam event, I was able to catch up with Alan. Here are the questions I asked him.

Me: "How did the team change from December to March?"
Quine: "We came together as a group. All the guys turned a page after Christmas, and started playing for each other. We're right in the hunt for a playoff spot. We all wanted to be in [the playoffs], and be in it for the fans."

M: "For the past couple of weeks*, you've been injured. You finally came back this week. Was it tough not playing for some time?"
Q: "It was tough. I stayed home when the guys went on the road trip. It's tough to watch them doing their own thing. Of course I wanted to be there. But, it's a part of the game. Once you get older, stuff like that is bound to happen. It's the way you deal with it, the way you come back stronger. It's good to be back."

M: "Last year, you got the chance to play your first couple of NHL games, and then scored a big goal in overtime. Was it tough to go from an AHL player to suddenly an NHL playoff player?"
Q: "I think the AHL is a good development league. I like the way the Islanders have done, as they don't like rushing guys. I was hoping for an opportunity, at a point in my third [AHL] season, I felt like I was ready, and to be an impact player. I was fortunate enough to get that opportunity."

M: "What do you think of this event Anders Lee is running?"
Q: "Anytime we can go help the community, support a cause, whether that would be cancer or diabetes, or children's foundation, whatever it is, make a wish, stuff like that where we can give back is important to us. All the guys showed up. I think it shows a lot about Anders as a person. He's a special person. He's an idol for many people out there. It's awesome that he can do that for us."

*this was recorded March 18, and Quine was injured weeks before March 18
Posted by Carter at 5:39 PM