My interview with Isles Cal Clutterbuck 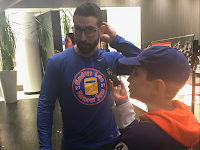 A big part of hockey is physicality. A stat that shows a lot of physicality is hits. The New York Islanders have one of the best hitters in the game in Cal Clutterbuck. He has less than 200 hits in a season just once in his career (not counting 2007-08, where he played in just 2 games). He also has over 300 hits 4 times. The Welland, Ontario native was drafted 72nd overall (third round) of the 2006 NHL draft by the Minnesota Wild. After 6 seasons there with 110 points (62 goals and 48 assists), Clutterbuck, 29, was traded to the New York Islanders along with a 3rd round pick for Nino Niederreiter. He was joined by Matt Martin and Casey Cizikas on the Isles 4th line, and by 2015, that line was considered one of (if not) the best 4th lines in hockey history. Martin is also a big hitter, and Cizikas is a gritty centre. In 4 seasons with the Isles, Clutterbuck has 78 points (39 goals and 39 assists).
At his teammate Anders Lee's Kan Jam event, I was able to catch up with Cal. Here's the questions I asked him.

Me: "How has the team changed from December to now?"
Clutterbuck: "The team has always been the same. Sometimes when you have someone different giving you instruction, it changes your outlook on things. [Doug Weight] has flipped the script a little bit.

M: "What do you think of rookie Joshua Ho-Sang since his call up?"
C: "He's a talented guy. He's a flashy type of player. I think people are taking a liking to that. You can hear them every time he touches the puck, and they're getting excited, oohing and ahhing. He adds another dimension to the offense of our team.

M: "What do you think about this event Anders Lee is running?"
C: "I think it's great. Obviously it's a good cause. Cancer is a tough thing. I think everybody is affected by it. It's nice for us to be able to come out and have some fun with the fans, to enjoy ourselves. I think it's a great day."
Posted by Carter at 5:25 PM