My interview with Casey Cizikas 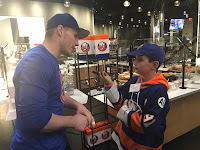 Casey Cizikas helps the New York Islanders in many aspects of hockey. First, he excels at penalty killing, and can even generate scoring chances on the PK. He's also a very gritty 4th line center, and can win draws. The Toronto, Ontario native was drafted 92nd overall (4th round) by the Isles in the 2009 NHL draft. In 2015-16, the Isles 4th line of him, Cal Clutterbuck and Matt Martin was considered one of the best 4th lines in NHL history by many. Cizikas, 26, has 108 points (37 goals and 71 assists) in 349 career NHL games, all for the Islanders.
At his teammate Anders Lee's Kan Jam event, I was able to catch up with Casey. Here's the questions I asked him.

Me: "How has the team changed from December to now?"
Cizikas: "It's exciting. As a group we came together and decided what our fate was. Especially with Dougie [Weight]. He came into our locker room and talked to the guys and made sure we're all on the same page, and got things going."

M: "How has Joshua Ho-Sang impacted the team in his short time here?"
C: "He's been unbelievable. He's brought a lot of energy into the team, and he's been playing really, really well. He's done a lot of good things. It's exciting to watch [him]. He's done a really good job since being called up."

M: "You've missed many games this season due to a hand injury. Is it tough to sit out for many games?"
C: "It's always fun to play. It's tough watching from up top, so to be out there with the guys, battling and playing the sport we love, it's a lot of fun."

M: "What do you think of this event Anders Lee is running?"
C: "He's doing an unbelievable job, and he's doing it for an incredible reason. He's put together this Kan Jam event, and he's gotten a lot of response from it. Everyone is coming together. They're bringing awareness, and that's the main thing. He's put together one great event here, and it's nice to see all the support he's having.
Posted by Carter at 12:03 PM