My interview with Shane Prince 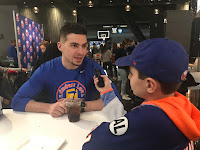 Speed pays off in the NHL. Speedy winger Jason Chimera has had a long career because of his speed. Fellow New York Islanders winger Shane Prince also has very good speed, and he takes advantage of that on the ice. The Rochester, New York native was drafted in the 2nd round (61 overall) of the 2011 NHL draft by the Ottawa Senators. But, Prince never got the opportunity to play full time for the Sens. He played just 44 games there, with 13 points (3 goals and 10 assists). At the 2016 trade deadline, the Sens traded Prince and a 7th rounder to the Islanders for a third rounder. In just a season a half, Prince has played more games with the Isles. He's played 70 of them, and recorded 23 points (8 goals and 15 assists).
At his teammate Anders Lee's Kan Jam event, I was able to catch up with Shane. Here are the questions I asked him.

Me: "How did the team change from December to March?"
Prince: "Obviously you never like to be in last place. It's good for our team to come back and be in a playoff spot."

M: "Was it tough to go from Ottawa to the Isles in a span of a minute last year?"
P: "It was a big change, it changes your life, the team your with and all the people in front of it. It definitely is a big change. It's good for me, and I'm happy to be here."

M: "How has Joshua Ho-Sang impacted the team in his rookie season?"
P: "He's a good player, we know he's skilled. We're happy to have him here. We're hoping he can help us win games."

M: "What do you think of this event Anders Lee is running?"
P: "It's a great event for a good cause. We have a lot of great guys on the team. We're all happy to be here, and we're all having a good time."
Posted by Carter at 2:20 PM