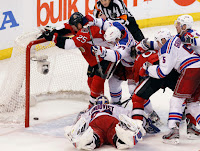 The country of Sweden probably can't wait for this series. Their goalie in international play for his entire career, Henrik Lundqvist and the New York Rangers go up against super Swedish defenseman Erik Karlsson and the Ottawa Senators.

First round: vs Montreal Canadiens in 6 games
Lundqvist and his 1.47 GAA and a SV% of .947 led the Rangers in round one. They have a very balanced team, which is always good to have.

First round: vs Boston Bruins in 6 games
The Sens have very strong skaters, and Craig Anderson had a solid round one with a 1.94 GAA and a SV% of .921. They look totally different than last year's Sens.

My prediction: Ottawa Senators
Honestly, I think this will be the first 7 game series in the playoffs. Both teams are even, but I'll give it to the Sens. Whoever wins will probably be eliminated in the eastern conference finals, though.