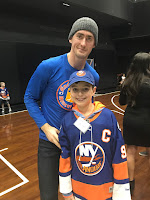 Brock Nelson is a top goal scorer for the New York Islanders. The Minneapolis, Minnesota native has scored around 20 goals in each of his last 3 seasons. He was drafted 30th overall (first round) of the 2010 NHL draft, by the Isles. He's also an ironman, playing in at least 72 games in all 4 seasons, and he played those 72 games in his rookie season. Nelson, 25, has 150 points (79 goals and 71 assists) in 314 career NHL games, all for the Isles.
At his teammate Anders Lee's Kan Jam event, I was able to catch up with Brock. Here's the questions I asked him.

Me: "How has the team changed from December to now?"
Nelson: "I wish I knew the answer. I think we're just playing smart, and [have] got a few lucky bounces."

M: "What do you think of Joshua Ho-Sang in his short time here?"
N: "He's pretty electric. He makes a lot of plays out there, a lot of skill. It's fun to watch him play out there.

M: "What do you think of this event Anders Lee is running?"
N: "It's pretty awesome. He's a special guy to put on an event like this. We've raised a lot of money for a very good cause. It's fun to be here.
Posted by Carter at 4:03 PM