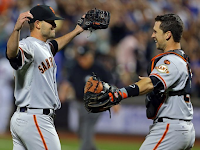 The Los Angeles Dodgers have claimed INF Mike Freeman and RHP Chris Heston off waivers from the Seattle Mariners, and have optioned both to the Oklahoma City Dodgers.

Freeman, 29, has hit .067 with a homer and an RBI in 30 ABs this year. He has a .135 batting average with that one homer and two RBIs in 52 ABs in his career for the Mariners and Arizona Diamondbacks.

Heston, also 29, has allowed 11 runs in five innings this year, striking out three batters. He's struck out 151 batters in 193 career innings with a 4.57 ERA in his career for the Mariners and San Francisco Giants. He threw a no hitter in 2015 with the Giants.
Posted by Carter at 10:36 AM