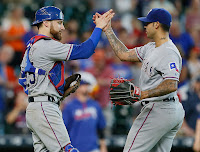 This is getting ridiculous. After a 5-3 win over the Detroit Tigers, the Texas Rangers extended their winning streak to 10 games. That's the longest winning streak for any MLB club so far in 2017.

The Rangers offense has been awake. They've scored 64 runs on the streak, with at least four runs scored in every game. Their pitching has been solid, allowing just 27 runs. That's 6.4 runs scored per game and 2.7 runs allowed per game.

Also, there's a new pitching hero every night. A different pitcher has won each game. Here's the list of winning pitchers in the last 10 games:

They've also done it with stars Cole Hamels and Adrian Beltre on the DL.

The only problem is that the Rangers have barely gained any ground on their rivals, the Houston Astros, who are in first place. The did lose yesterday, but have won 9 of their last 11.

The Rangers currently are second in the AL West (behind Houston) with a 23-20 record, 6.5 games back of the Astros.
Posted by Carter at 9:33 AM