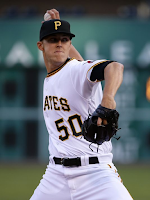 Cancer is very tough to deal with, and everybody has to deal with it. Recently, the Pittsburgh Pirates have received tough news on one of their best pitchers.

On Monday, 25 year old starter Jameson Taillon underwent surgery for suspected testicular cancer. The surgery was performed at Alleghany General Hospital. "Jameson has again proven to us what a strong person he is by the way in which he has reacted to this development," Pirates GM Neal Huntington said in a statement. "We are appreciative of Dr. Lynne and the staff at Alleghany General Hospital for their invaluable expertise and efforts in caring for Jameson. We have told Jameson that our only priority is his health and well-being. His teammates, our coaches, baseball staff and entire organization will support him in his recovery in every possible way and we will keep him in our thoughts and prayers."

Taillon's surgery is similar to the one Colorado Rockies pitcher Chad Bettis underwent in December. But Bettis' cancer remained, and had chemotherapy. He's expected to miss the entire 2017 season.

After his last start, the Pirates placed Taillon on the 10 day DL, with a groin injury.

Taillon is used to bad injuries. He had Tommy John surgery in 2014, surgery to replace a sports hernia in 2015. In the minors, he was hit in the head by a 105 miles per hour line drive. 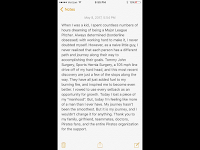